Outspoken regulator Rod Sims has given his strongest indication yet that he will not seek another term as chairman of the nation’s competition and consumer protection agency after more than a decade in the high-profile job.

Mr Sims’ current term as chair of the Australian Competition and Consumer Commission expires in the middle of next year and his future has been the subject of intense scrutiny in business, political and legal circles. In an interview with The Age and The Sydney Morning Herald, Mr Sims indicated he is unlikely to seek another stint in charge of the powerful body. ”By July next year will be 11 years. That’s a very long time in any organisation,” Mr Sims said. “As often stories are written about people who lead organisations staying too long, I think 11 years is a good run.” 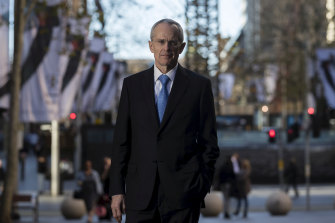 Rod Sims has been ACCC chair since 2011. Credit:Fairfax Media

There has been widespread conjecture that Mr Sims could seek or be persuaded to serve another term as chair of the ACCC given the vast amount of work the regulator has on foot that he has spearheaded during his tenure.

But Mr Sims’ latest comments suggest that is unlikely. “The honest answer is that this is next year’s issue. I’ve got a tonne of things to get done between now and Christmas, that will be next year’s issue,” he said.

“The only thing I do is observe that 11 years is a long time. I’ve got no more to say on that.”

Mr Sims has been a polarising figure in Australian regulation, where he is loved by some, respected by others and feared and often disliked by big companies on the receiving end of the watchdog’s actions.

He joined the ACCC in 2011 after a diverse business career where he has been a regulator, an economic adviser to the Hawke government and a corporate advisor to some of Australia’s largest companies. After serving an initial five-year term as ACCC chair, his tenure was extended in 2016 by the then Turnbull government and again in 2018 by current Treasurer Josh Frydenberg.

Mr Sims’ has notched up some remarkable victories during his tenure, most notably advocating for and securing much higher penalties for breaches of consumer law by big companies, new laws for unfair contract terms and misuse of market power as well as the regulator’s world-leading inquiry into digital platforms that introduced competition regulation of tech giants like Google and Facebook.

He has also in recently made a push to increase the ACCC’s powers when it comes to mergers, giving it rather than the Federal Court final say on whether to allow company tie-ups. The ACCC has not won a competition case before the Federal Court in 20 years.

Some observers have suggested Treasurer Josh Frydenberg should consider extending Mr Sims’ current term for another two years so the organisation can prepare for a new leader.

Such an extension could help the ACCC secure the return of widely regarded former ACCC Deputy Chair, enforcement, Sarah Court, who was poached in April by the corporate regulator ASIC to head up its enforcement activities.

The ACCC’s other deputy chair Delia Rickard’s second five-year term is also up for renewal in mid-2022.

A spokesman for Josh Frydenberg said the government was yet to decide about Mr Sims’ tenure or replacement, saying the need to make a decision was some time off.