There is a silver lining to the drought affecting the northeastern U.S. that has frustrated farmers, dried up rivers and reservoirs, and brought water use restrictions and brush fires to the region.

While several factors have affected the bottom line this summer, including inflation, staffing shortages, and supply chain issues, some businesses say, yes, things are generally going well, in part because of the weather.

HERE ARE THE HEALTH RISKS OF EXTREME HEAT

"Sunny days at the ballpark are the best days," said Geoff Iacuessa, president and general manager of the Portland Sea Dogs minor league baseball team, which is seeing fewer rainouts and higher attendance.

Large tracts of the Northeast from Pennsylvania to Maine are experiencing drought conditions, according to the U.S. Drought Monitor. A swath of the region from southern New Hampshire, across much of eastern Massachusetts and including nearly all of Rhode Island and into eastern Connecticut is suffering from extreme drought conditions, the fourth worst out of five drought stages.

In some areas, rainfall amounts in the last 90 days are about 6 inches (15 centimeters) lower than normal, according to the Drought Monitor.

The Sea Dogs, the Maine-based Double-A affiliate of the Boston Red Sox, have averaged more than 5,700 fans per game, and while season-to-season attendance comparisons are imprecise, that's about 100 more per game than in the pre-pandemic years of 2018 and 2019, Iacuessa said. The 2020 season was canceled because of the COVID-19 pandemic and home field capacity was limited at the start of last season. 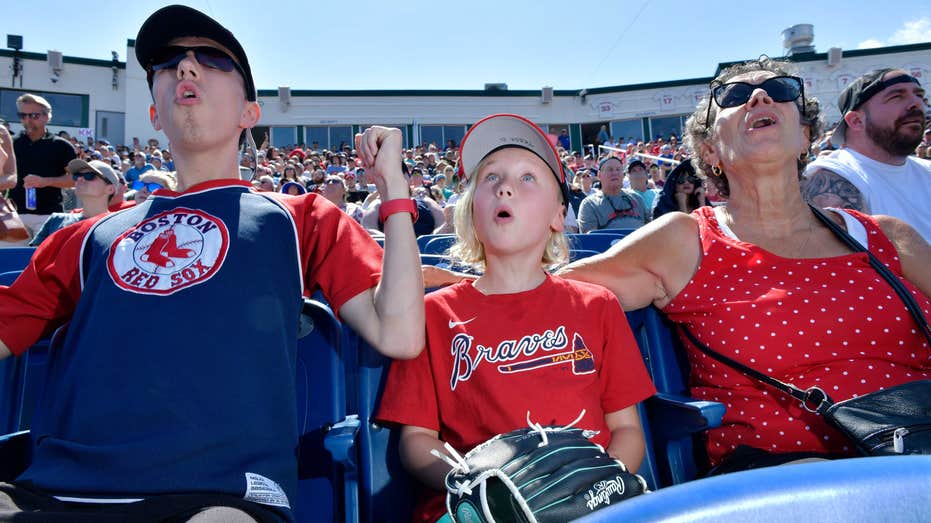 Baseball stadiums could profit from a prolonged drought in the U.S., as hot dry weather would attract more fans to games and increase demand for cool treats like ice cream and beer. Pictured: Baseball fans enjoy the warm weather at a game at at Hadlo (AP Photo/Josh Reynolds / Associated Press)

HEAT WAVES EXPLAINED: WHY SOME HEAT WAVES ARE WORSE THAN OTHERS

At Groundskeeper Inc., an Ashland, Massachusetts, commercial landscape design company, the dry weather has allowed the crew to get a lot more work done, especially when it comes to so-called hardscaping — the installation of patios, walkways, retaining walls and the like — company president Brian Churchill said.

Working with concrete, mortar, and brick adhesives is nearly impossible during a steady rain, he said.

"I would say it has been a very productive year," said Churchill, who is also the past president of the Massachusetts Association of Landscape Professionals. "No rain days, no delays in the schedule. We’re able to work five days a week and get a lot of work done."

And that benefits everyone.

There is a downside for landscapers during the drought, however, said Miriam Hellweg, director of maintenance at a Blade of Grass LLC, a Sudbury, Massachusetts, landscape design company.

"The drought is stressful for plants, so first we have more plants dying," she said. "The other piece is with a drought the plants aren't growing as much, so we’re not doing as much mowing."

The weather, along with an increase in the self-imposed capacity restrictions put in place to prevent overcrowding, has helped pull more people to Santa’s Village, a Christmas-themed amusement park in Jefferson, New Hampshire, said Jim Miller, a spokesperson for the 15-acre family-owned facility.

"Everybody likes the perfect weather, and we’ve been at capacity on most days," he said.

The park founded in 1953 only sells advance tickets online, so when families are checking the weather forecast several days out before booking their visit, all they have seen this summer is blue skies, he said.

The drought has been a mixed bag for Tom Bukowski, owner of Safari Golf, a miniature golf course in Berlin, Connecticut. Yes, dry weather is good for business, but brutal heat can be a detriment. Connecticut had a six-day stretch in July when temperatures were 90 degrees Fahrenheit or higher and another eight-day stretch in early August with 90-degree plus temperatures.

"If it gets too hot, not many people play, but it's still better than rain, because when it rains, no one comes out," he said.

Business this year has been tempered by inflation, he said. In the past, the whole family would play. He's noticed that this year, parents are paying for their kids, but sitting out themselves to save a little.