Container shipping from Chinese ports has collapsed since the outbreak of coronavirus and has yet to show any sign of recovery, threatening weeks of chaos for manufacturing supply lines and the structure of global trade. 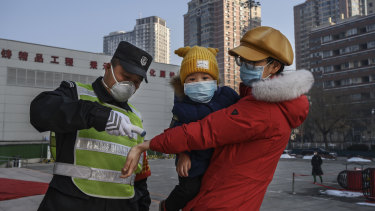 The Chinese economy has been battered by the coronavirus.Credit:Getty Images

Almost half of the planned sailings on the route from Asia to north Europe have been cancelled over the last four weeks. A parallel drama is unfolding on routes from the Pacific rim to the US and Latin America.

Lars Jensen, from SeaIntelligence in Copenhagen, said the loss of traffic is running at 300,000 containers a week. This will cause a logistical crunch in Europe in early March even if the epidemic is brought under control quickly.

"The dominoes are toppling through the whole chain. When ships don't leave port in China, they don't stop to pick up cargo in Hong Kong, Saigon, or Singapore either. Freight rates are in free fall," he said.

Refrigerated ships full of frozen food – known as "reefers" – are unable to -enter Chinese ports because the berths are taken and they cannot tap into electricity chargers. Meat supplies are spoiling at sea.

The US Agriculture Transportation Commission said the Pacific supply chain has been badly "compromised" and logistical headaches are building up at US ports. There will soon be an acute lack of containers in both American and European ports. Mr Jensen said European factories are -already feeling the shock. "The first hit is the auto industry as it has a very tight supply chain. Companies are having to airlift in supplies from Asia, which is extraordinarily expensive," he said.

Fiat Chrysler has suspended production of the Fiat500L in Serbia for lack of audio systems from China. Jaguar Land Rover said it could last another couple of weeks before gaps emerged at its UK plants. Optimists expect China to rebound quickly as virus lockdowns are relaxed but there is little hard evidence of this so far. Nomura's daily tracking index shows barely a flicker of movement on the economic needle.

The Baidu Migration index for 15 cities shows that 74 per cent of travellers have yet to return from the lunar new year holiday, often because they cannot move. Passenger travel on trains is still down 79 per cent. The Wind index of new home sales in 30 major cities shows sales are down 88 per cent. This is squeezing over-leveraged property developers. They rely on advance sales to stay afloat and to roll over dollar loans on the Hong Kong funding markets.

Run rates at oil refineries are off by 3 million barrels a day – enough to alter the global crude balance if it persists – and daily coal consumption is 42 per cent below normal. Car sales are down 92 per cent.

Global equity markets are "looking through" the crisis – unlike bond markets – betting on a V-shaped recovery in the second quarter. This assumes that official Chinese data on contagion can be trusted after the testing criteria were loosened again, and given the -police state tactics being deployed to silence independent reporting.

The sudden jump in Korean cases linked to one church with no particular ties to China is a warning of what could be in store. Infectious disease experts say Japan's decision to let passengers off the Diamond Princess cruise ship without fresh quarantine is courting fate given the high failure rates of the tests. Japan risks an epidemic that may ultimately threaten the Olympics.

Kristalina Georgieva, the head of the International Monetary Fund, said she fears a W-shaped recovery, meaning a short-term bounce based on hopes of containment followed by a second phase as it becomes clear that Covid-19 is spreading around the world after all.

Oxford Economics says a global pandemic would push both the US and the eurozone into outright recession. -Europe has no monetary ammunition to fight a downturn.

The Chinese central bank has trimmed loan rates to ease pressure but this makes little difference since credit demand is wilting. Far more significant is pressure on banks to evergreen loans to small businesses facing insolvency, as well as moves to waive social security taxes for employers.

Yu Yongding, an ex-ratesetter for the People's Bank of China, says this crisis is far more serious than the Sars epidemic in 2003. "The Chinese authorities must prepare for the worst. The battle against virus undoubtedly will be very costly, and will reverse some of the recent achievements in reining in financial risks. For now, however, any potential problems related to debt, inflation, or asset bubbles are secondary," he wrote in Caixin Magazine.

Fiscal stimulus is coming but the transmission channels will remain blocked as long as the lockdown measures stay in place. But to lift the curfew risks losing control of the virus. China faces an impossible dilemma.