There should be a law against holding election campaigns while people are trying to enjoy their Easter break. So let’s forget politics and think about the strange ways the economy is changing as the old industrial era gives way to the post-industrial, digital era.

The revolution in information and communications technology is working its way through the economy, changing the way it works. The markets for digital products now work very differently from the markets for conventional products.

So, a growing part of the economy consists of markets that don’t fit the assumptions economists make in their basic model of markets, as Diane Coyle, an economics professor at Cambridge University, explains in her book, Cogs and Monsters. 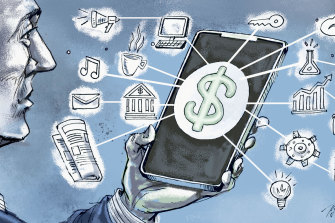 The new economy of digital production has put scale economies on steroids.Credit:Joe Benke

And the way we measure the industrial economy – using the “national accounts” and gross domestic product – isn’t designed to capture the new range of benefits that flow from digital markets.

Starting at the beginning, the great attraction of the capitalist, market economy is its almost magical ability to increase its productivity – its ability to produce an increased quantity of goods and services from an unchanged quantity of raw materials, capital equipment and human labour.

It’s this increased productivity – not so much the increase in resources used – that explains most of the improvement in our standard of living over the past two centuries.

Where did the greater productivity come from? From advances in technology. From bigger and better machines, and more efficiently organised factories, mines, farms, offices and shops, not to mention better educated and skilled workers.

Particularly in the past 70 years, we benefited hugely from the advent of mass-produced consumer goods on production lines. Economists call this “economies of scale” – the bigger the factory and the more you could produce, the lower the cost of each item.

Although each extra unit produced added marginally to raw material and labour costs, the more you produced, the more the “fixed cost” of building and equipping the factory was averaged over a larger number of items, thus reducing the “average cost” per item.

Decades of exploiting the benefit of economies of scale explain why so many of our industries are dominated by just a few big firms.

But the new economy of digital production has put scale economies on steroids. Coyle says software – and movies, news mastheads and much, much else – is costly to write (high fixed cost) but virtually costless to reproduce and distribute (no marginal cost).

So, production of digital products involves “increasing returns to scale”, which is good news for both producers and consumers – everyone except economists because their standard model assumes returns are either constant or declining.

But another thing that makes the digital economy different is “network effects”, starting with the greatest network, the network of networks, the internet. The basic network effect is that the more users of the network there are, the greater the benefit to the individual user. More increasing returns to scale.

Then, Coyle says, there are indirect network effects. Many digital markets involve “matching” suppliers with consumers – such as Airbnb, Uber and Amazon Marketplace. For consumers, the more suppliers the network attracts, the better the chance of quickly finding what you want. But, equally, for suppliers, the more customers the network attracts, the easier it is to make a sale. Economists call these digital networks “two-sided platforms”. The owner of the platform sits in the middle, dealing with both sides. 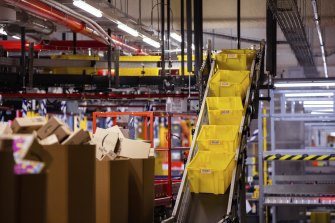 Amazon is a beneficiary of the network effect, which means that the more users of the network there are, the greater the benefit to the individual user.Credit:Dominic Lorrimer

So, yet more benefits from bigness. And that’s before you get to the benefits of building, mining and sharing large collections of data.

All these benefits being so great, it’s not hard to see why you could end up with only a couple – maybe just one – giant network dominating a market. Welcome to the world of Google, Facebook, Apple, Amazon and Microsoft.

In their forthcoming book, From Free to Fair Markets, Richard Holden, an economics professor at the University of NSW, and Rosalind Dixon, a law professor at the same place, note that a number of leading lights have proposed breaking up these huge tech companies, in the same way America’s big telephone monopoly and interlocking oil companies were broken up last century.

But, the authors object, in most of these markets the power of these giants stems from the “network externalities” we’ve just discussed.

“The key driver of the value that these firms create is precisely the network externalities that they bring about. Facebook is valuable to users because lots of other users are on Facebook . . .”

“Google is a superior search engine because in performing so many searches, machine learning allows its algorithm to get better and better, making it a more desirable search engine.”

Research by Holden, Professor Luis Rayo and the Nobel laureate Robert Akerlof has found that markets with network externalities tend to have three features. First, the firm that wins the initial competition in the market ends up with most of the market.

Second, it’s difficult to become a winning firm, and success is fragile. For instance, Microsoft has had little success getting its search engine Bing to take business from Google. And Netscape was once dominant in the browser market, but suddenly got supplanted.

Third, winners can’t go to sleep. They must constantly innovate and seek to raise their quality.

This makes the tech markets quite different from conventional markets like oil or even old-style networks like railways.

Economists’ efforts to get a handle on the new economy continue.

Ross Gittins is the economics editor.