Home » Economy » Digital gold: What is Bitcoin and why is it going mainstream?

If you were to jump in a time machine and travel back 10 years, you would be hard pressed to find a better investment than the much-questioned and often misunderstood cryptocurrency Bitcoin.

The past 12 months has brought further attention to the somewhat abstract asset, as stimulus-flush investors pushed up the price of one Bitcoin almost 200 per cent to more than $51,000 and a raft of major US asset managers began to publicise their significant crypto holdings. 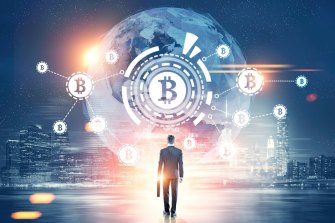 Bitcoin is becoming more popular as a legitimate investment and store of value.Credit:Bitcoin.com

With Australians young and old increasingly looking to cryptocurrencies as a serious investment option, here is a brief summary of the what you need to know before taking the plunge.

Bitcoin is a virtual currency, most commonly known as a cryptocurrency. As such, despite the name, Bitcoins are not physical, existing instead on a huge publicly accessible digital ledger known as the blockchain. Every transaction made with Bitcoin is viewable and track-able on this database.

Unlike other currencies, Bitcoin is not issued by a central bank or government. Instead, the currency is “mined” – a bit like how someone might mine gold.

However, instead of repelling down a mineshaft, Bitcoin miners are instead running banks of massively powerful computers, tasked with solving increasingly complex maths equations. If a miner is the first to solve the equation, they are granted 6.25 Bitcoin ($270,000).

The process of mining the coins also processes and verifies transactions on the Bitcoin network.

Bitcoin is widely regarded as the first major cryptocurrency, invented in 2009 by an anonymous person under the pseudonym of “Satoshi Nakamoto”. At the time, one Bitcoin could be purchased for as little as $0.0008.

Why is it worth so much?

Here lies the million-dollar question. Unlike other assets, such as property, resources or traditional equities, Bitcoin does not have a product or commodity tied to its value. It does not generate cashflow and is primarily used as a means of storing and transferring value.

With this in mind, it is tough for finance traditionalists to wrap their heads around why someone might pay $52,000 for a seemingly worthless virtual coin. However, the idea becomes far more acceptable when comparing Bitcoin to another classic investment – physical gold.

“Gold has become accepted as a form of currency and a form of value that is easily transferable, and Bitcoin takes that to the next level because the transfers are quicker, it’s easier to fractionalise, there is less hassle and it is far more secure,” she says.

Bitcoin is also limited by its programming so there can only be 21 million coins in existence. This is attractive from an investment standpoint, Ms Bowler says.

“You can’t just go and devalue the currency by printing more, and that’s one of the many facets of Bitcoin that investors find reassuring,” she said.

Is it the only cryptocurrency?

No. There are hundreds of other cryptocurrency alternatives to Bitcoin, each with their own use cases and value proposition, much like how there are multiple shares on a stock exchange.

Some of the most notable are Ethereum (a platform which allows users to execute automatic contracts), Ripple (a payment service popular amongst institutions and banks) and Litecoin.

However, Bitcoin is comfortably the largest and most well-known cryptocurrency, with a market capitalisation of more than $600 billion.

How do you buy it?

Buying crypto is as easy as buying shares. Investors can use a range of online exchanges to trade Bitcoin, along with most other major cryptocurrencies.

You don’t have to splash out $52,000 for an entire Bitcoin. You can buy just a fragment of one coin.

Trading apps such as Coinbase are popular for buying smaller amounts.

All platforms require users to complete a “know your customer” process for anti-money laundering purposes, and purchases can usually be financed by bank transfer.

If an exchange collapses and loses your coins, the government won’t step in to reimburse your lost funds.

I’ve got some, so where do I store it?

After buying Bitcoin or another cryptocurrency, the coins are stored in a “wallet” on the platform. These “wallets” can store any number of currencies and are a key part of trading crypto, much like a trading account with a broker. Only you can access the coins inside the wallet.

However, while storing small amounts of cryptocurrencies on exchanges is generally safe, if your purchases begin to stretch into the thousands, a personal wallet is highly advisable.

Ms Bowler advises taking personal custody of your Bitcoin, as regulation in the crypto space is fairly lax. If an exchange collapses and loses your coins, the government won’t step in to reimburse your lost funds. 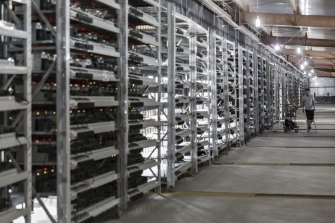 Powerful computers are required to mine Bitcoin.Credit:Qilai Shen

Companies such as Ledger and Trezor offer personal cryptocurrency wallets for as little as $100. The devices look similar to USB sticks and connect via software on your computer which allows you to transfer your precious crypto across.

When setting up a personal wallet, you are presented with two crucial pieces of information. Firstly, each wallet has a public key, which is a string of numbers and letters which allows you to receive coins into your wallet, much like a BSB number and bank account.

Secondly – and far more importantly – each wallet includes a private key, which is a secret number which grants full access to your wallet. These keys often come in the form of a 12- or 24-word recovery phrase, comprising of a string of random words.

This phrase is the master key to your Bitcoin and should be protected and stored somewhere secure.

It is worth noting that your Bitcoins are not actually stored in your wallet. The keys mentioned above only give you the right to access your Bitcoin, which is stored on the blockchain. Wallets only serve to store and protect your private key.

How do you sell? How are profits taxed?

Selling your Bitcoin is as simple as buying it. Just transfer your coins back to an exchange and sell it as if you would a share.

However, in Australia, cryptocurrency is treated as property and, as such, an asset for Capital Gains Tax purposes, so you will need to pay tax on any profits you make when trading crypto.