The world's corporate sector borrowed a record $US2.1 trillion ($3.2 trillion) through 2019 as central banks slashed interest rates, prompting warnings much of the debt is of low quality and at growing risk of default especially if the global economy falters.

As ratings agency S&P Global said governments around the world were likely to tap markets for $US8.1 trillion in debt this year, the OECD said the corporate debt sector was expanding dramatically in a development that posed a global financial risk. 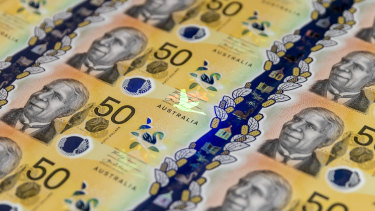 Businesses around the world are borrowed $US2.1 trillion through corporate bonds last year with the quality of the debt declining in quality.Credit:AAP

The Paris-based thinktank said global non-financial corporate debt reached a record $US13.5 trillion at the end of 2019 as last year's fall in global interest rates encouraged businesses to ramp up their borrowing.

But the quality of the corporate bonds issued is falling.

The OECD said this increase in non-investment grade bonds would have longer term repercussions including higher default rates and greater risks to the global economy in the event of a downturn.

"These are features that may amplify the negative effects that an economic downturn would have on the non-financial corporate sector and the overall economy.

"As a result, the size, quality and dynamics of today's corporate bond markets has become a factor to consider in the different scenarios that underpin monetary policy." 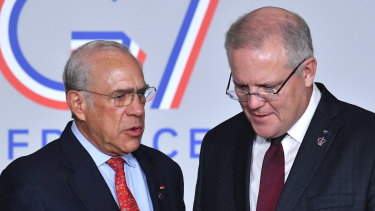 AMP Capital chief economist Shane Oliver said much of the borrowing by US corporates was to finance share buybacks that in turn were helping to drive up equity prices.

He said the problem for big borrowing businesses would be a change in interest rates or the global economy.

"They can get away with it as long as we don't run into a recession or interest rates don't start going up," he said.

Separate research from ratings agency S&P Global shows it is not just the corporate sector going on a borrowing binge.

It said on Friday it expects governments around the world to borrow the equivalent of $US8.1 trillion through 2020. This is a 20 per cent jump on the levels borrowed in 2015.

The biggest borrowers will be the United States, which is expected to tap bond markets for $US3 trillion this year, and Japan which is forecast to borrow $US1.8 trillion.

By the end of 2020, the agency believes total government debt globally will reach a record $US53 trillion, a 30 per cent increase over the past five years.

Angola is the nation facing most financial pressure. Three-quarters of its debt will be rolled over this year while in Papua New Guinea and Egypt about 40 per cent will have to be rolled over.

The Australian government currently has $573.5 billion worth of bonds on issue. So far this financial year it has issued $35.7 billion in bonds with another $19.3 billion due to be sold by July 1.