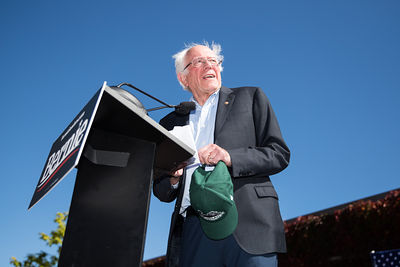 Two Russian pranksters say they successfully duped U.S. Senator Bernie Sanders into believing they were environmental activist Greta Thunberg and her father Svante during an 11 minute call with the 2020 Democratic party presidential candidate.

Vladimir Kuznetsov and Alexey Stolyarov — who have a history of targeting US politicians — told The Associated Press they had pranked the senator and posted audio of the call to YouTube.

The conversation began warmly with Stolyarov taking the role of Svante while an unknown woman played Greta. The three spoke about the possibility of Thunberg endorsing his presidential campaign.

“Let us continue to talk and when you come to the United States I will bring some people together and we can do some interesting things, and if you wanted to make a statement in support of my candidacy and the program we have outlined for climate change, I would be very very appreciative,” Sanders said.

Things eventually went downhill after the faux-Thunberg peppered the senator about his 1988 visit to the Soviet Union.

“In the Soviet Union in 1988, after you were recruited you were programmed to work for Russia and your memory was erased so the CIA wouldn’t track you down,” she said.

“This is what you believe?” Sanders responded.

At some point during the rant Sanders hung up the phone.