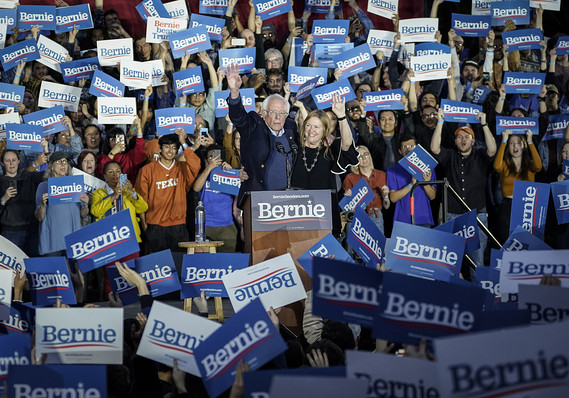 JACKSON, Wyo. (Project Syndicate) — For the past 50 years, almost every U.S. presidential election has brought a new swing of the national political pendulum.

An impeached (but brainy) philanderer, Clinton was succeed by Bush’s son, the moralizing and anti-intellectual George W. Bush, who then gave way to the Spock-like Barack Obama, before the pendulum’s widening swing extended all the way to the unprecedented fringe of Donald Trump.

So, is it any wonder that as the Democrats muddle through their nominating contest, their most extreme candidate is running away with the race? After the Nevada caucuses, Sen. Bernie Sanders has more than just wind at his back. He represents exactly the type of partisan reaction to Trump that should be expected, and he is the latest manifestation of the national political pendulum’s steepening arc.

Sanders, a lifelong democratic socialist who has never joined the Democratic Party, embodies the opposite of America’s 1980s-style, greed-is-good incumbent.

Why has the arc of the United States’ electoral swings become so wide?

Once upon a time, successful presidential candidates had to embrace hope and optimism. This made sense, for the world’s wealthiest country was on a more than century-long upswing, living large in its fevered American Dream.

When leaders deviated from this script in periods of national difficulty (think of Carter’s “malaise” speech), or were blamed for temporary recessions at odds with rising-tide expectations (Bush père), the electorate showed them the door.

Then, the millennium turned and the American Century was laid low by three successive existential body blows: the 9/11 terrorist attacks, misconceived and inconclusive wars in Afghanistan and Iraq, and the 2008 global financial crisis. For more than a decade since the crisis, policy makers have tried everything to boost economic growth, for nothing lifts more boats.

And yet debate still rages about what can be done to restore 4% annual gross domestic product growth . The answer is probably nothing sustainable, as extreme tax cuts have shown.

Simply put, the U.S. economy grew abnormally fast for the century after the Civil War, because human life spans almost doubled and productivity soared, owing to breakthrough discoveries that rarely come around (for example, vaccines, antibiotics, electricity, and microchips).

By contrast, despite persistent and ever more extreme unconventional monetary policies since the financial crisis, the Congressional Budget Office expects real (inflation-adjusted) GDP growth this decade to average just 2% annually. This may not be secular stagnation, so much as a reversion to mean: since 1800, the U.S. economy has grown at roughly the pace the CBO now projects.

And critically, the last decade of ultra-loose monetary policy widened wealth inequality so much that many in the middle class fell into the resulting chasm, taking flagging faith in the American Dream with them.

And with that faith probably went any hope for a moderate Democrat to win the 2020 nomination.

After all, Democrats like Joe Biden, Pete Buttigieg, and Amy Klobuchar talk a lot (even with their inevitable shift left) like Bill Clinton and Robert Rubin, avatars of an era that seemed good at the time, but today is viewed as the period when jobs were globalized away, median incomes stagnated, and a new plutocracy was not just born, but sponsored by its national leaders.

Demographics, like gravity, are close to an immutable force.

As much as the traditional “wise” men and women of the Democratic Party try to convince voters that nominating Sanders will re-elect Trump, most of the party’s youth, immigrant, and minority blocs (the Democrats’ literal future) appear to disagree. They likely see in Sanders someone who speaks convincingly to lost hopes and wants fundamentally to change a system that no longer offers them a credible path forward.

After all, why defend a status quo that leaves you deep in debt, tenuously employed, badly housed, and one medical emergency away from economic ruin? Ironically, this powerful message is similar to Trump’s appeal to disaffected working-class voters to win the Republican nomination and the presidency in 2016.

Elections are uncertain, and for all the self-serving rhetoric of the Democratic establishment (and of Michael Bloomberg’s $460 million, and counting, in advertising) that nominating Sanders would ensure Trump’s re-election, there is likely a close to even chance that this consensus thinking is wrong.

Sanders could win a presidential election for any number of reasons. The country is almost perfectly divided regardless of candidate, swing voters are unpredictable, electoral math is tricky, Trump has plenty of weaknesses, and a lot can happen between now and November.

Let’s not forget that most political and market forecasters got the 2016 election wrong. Today, as America’s national ethos of optimism seemingly gives way to bipartisan disillusionment, Sanders’ momentum is both understandable and not to be underestimated.

The world’s biggest owner of stocks takes $232b hit