Home » Economy » Australians love a puffer jacket, but can they save Kathmandu?

A black puffer jacket, often emblazoned with the Kathmandu brand, has long been a wardrobe staple for Australians battling a chilly winter. But, despite their ubiquity, the company behind the iconic parka has had its fair share of troubles.

Founded in 1987 by reclusive New Zealand businesswoman Jan Cameron, Kathmandu (known officially as KMD Brands) has staked itself as one of the country’s premiere outdoor apparel retailers, aided by a 2009 sharemarket float that saw the business’ market capitalisation climb as high as $1.7 billion.

However, the COVID-19 pandemic savaged the business as lockdowns and supply chain issues hurt the company’s extensive local and international store network, with sales falling by nearly 40 per cent at its namesake brand.

Today, KMD Brands (which also includes surfwear retailer Rip Curl and hiking boot maker Oboz) is hopeful of a post-pandemic recovery. But with its shares near a 12-month low, can the business return to its peak?

How it started: The Kathmandu brand was founded by Jan Cameron, who saw a need for higher-quality, modern outdoor apparel in the Australian market. The first store opened on Melbourne’s Hardware Lane in 1987, selling a range of goods, including sleeping bags and, of course, down puffer jackets.

Following this were a tumultuous few years when shares in the company changed hands multiple times between Cameron and her various partners. However, the business expanded into NZ through this. By 2006 the company had 46 stores, including some in Britain.

In 2006, Cameron sold the business to private equity for about $500 million. Three years later, Kathmandu floated on the Australian Securities Exchange at a share price of $1.20.

The final pieces of the puzzle fell into place in 2018, when the company bought hiking boot brand Oboz for nearly $100 million, and in 2019, when the business made the savvy acquisition of surfwear brand Rip Curl for $350 million.

How it’s going: Despite now operating more than 300 stores globally, alongside an additional 8500 licensed resellers, Kathmandu’s share price today (trading as KMD Brands in the ASX) is below its listing price. They now change hands for about 90¢, giving the company a market capitalisation of $650 million.

Much of this is due to a savage sell-off following the arrival of COVID-19, from which the business has not recovered. However, the company has also had some operational struggles due to the pandemic, including impacts from extended lockdowns across Australia and NZ, and supply chain issues.

The bull case: At its full-year results, Kathmandu reported a 10.3 per cent increase in sales for August, compared to before the pandemic, and a $10 million improvement in its earnings compared to last year. 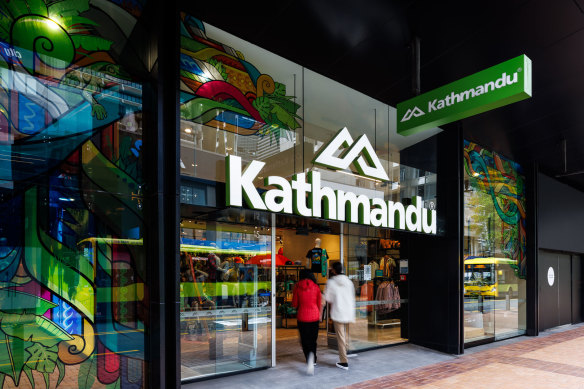 KMD brands saw record sales for FY22 but its profit dropped as the impacts of COVID lockdowns made themselves felt.

UBS analyst Bianca Fledderus told clients in a research note that while the company’s profits for the past year had come in below expectations, the outlook for the first weeks of the new fiscal year were positive. Kathmandu’s stronger-than-expected balance sheet was also a plus, he says.

With La Niña likely to cause a wetter-than-usual summer in the Southern Hemisphere and international travel back on the agenda for many, demand for the company’s outdoors gear should remain high through the first half of the 2022-2023 financial year.

The company has also shown a strong track record in acquisitions, with both Oboz and Rip Curl paying dividends for shareholders. It is possible additional purchases in the outdoors sector could see the company strengthen its footing further.

The bear case: Due to being an outdoors retailer, much of Kathmandu’s performance relies on the weather. A warmer than expected winter can dampen the company’s sales, and summer is often a slower period for the business – though the acquisition of Rip Curl has improved its performance in the warmer months.

The company is also running with an elevated inventory level due to investing in more stock through the persistent shipping delays of the past two years, which could lead to an increase in discounting, affecting profits.

On Wednesday, Daly admitted the business was “struggling” to find enough staff to work in its stores, as the business had relied on the now-scarce backpacker crowd to man its counters. “On most days, we will have to keep a store closed [because of lack of staff],” he said.

Kathmandu also suffers from the same uncertain outlook as many of its retail peers, as high-interest rates and an increasingly inflationary environment savage discretionary purchases.