Western Australia is too reliant on China and needs to look to other emerging Asian superpowers to diversify its trade partnerships, one of the world's leading independent economists has warned.

The global economy has been rattled since January when countries were made aware of the deadly coronavirus COVID-19, which originated in the Chinese city of Wuhan and has since killed 1700 and infected more than 70,000. 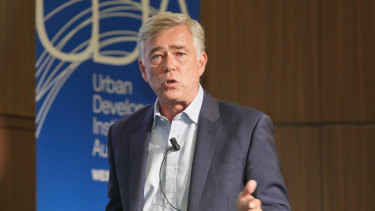 Its presence threatens to dent the global economy. Australia has banned tourists travelling from mainland China, where nearly half a billion people have been placed into some form of quarantine.

Speaking at an Urban Development Institute of Australia WA luncheon on Friday, economist Jonathan Pain said Australia – and particularly WA – was vulnerable to such economic shockwaves.

In 2017-18 China received 46.1 per cent of WA's exports, which include resources and food. The state's next biggest partner was Japan at 14.2 per cent.

Mr Pain told the packed room of property and planning professionals Australia and WA needed to engage other Asian nations such as India, Indonesia and Vietnam to reduce exposure to economic quakes like the coronavirus.

"You import too much from China and export too much to China. Look at Vietnam, South Korea, Taiwan, India. Any other country in Asia."

Mr Pain said Indonesia should be a particular focus for the WA and Australian governments given its proximity.

"This is a remarkable nation; the fourth most populous in the world, 265 million people," he said.

"The increase in the Indonesia population in just the last five years is equivalent to the entire population of Australia.

"We need to engage more with Indonesia, they are our friends. You here in WA should be engaging with them more than any other part of this nation."

Mr Pain also urged the federal government to get over its "ideological fixation" with budget surpluses and look at fiscal stimuli to help the nation weather the oncoming storm.

"This is a government that has been entranced by this back in the black," he said.

"The necessity for fiscal stimulus is now quite overwhelming. I have been quite stunned with how long it has taken the leading economists in Australia and around the world to fully quantify and identify the ramifications of what is happening in China.

"Canberra, it is coming. The writing is on the wall. We can see the whites in the eyes of shockwaves coming out of Wuhan."