Home » Economy » Are you suffering ‘middle-class pandemic guilt’? Perhaps you should be

I’m calling it “middle-class pandemic guilt” and it’s a very nice problem to have. It’s that sense of unease you feel sometimes as you settle onto the couch, clutching a piping hot cup of tea, to watch the daily press conference from the comfort of a living room you own (albeit with a bit of help from the bank) on a welcome break from the permanent job you still have, modified to facilitate you working from home.

It’s that feeling of guilt that while others have taken a hit to their incomes because of COVID-19, you’ve actually managed to save a bit more. But you’re well aware that in the process, you’ve managed to deprive that local cafe owner near your usual workplace of a vital source of revenue. And you know the casual workers who used to make your lunch have all had to ring up Centrelink to try to get a disaster payment to keep their families afloat. 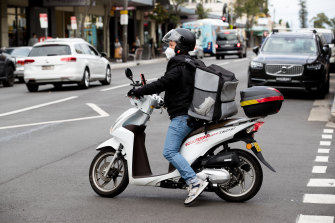 An army of low paid workers are braving the pandemic to keep income coming in.Credit:Janie Barrett

It’s the admiration-tinged-with-shame you feel when you see TV footage of the army of low paid workers in cleaning, meal delivery services, healthcare and childcare industries who are still out there braving the pandemic.

It’s middle-class guilt on steroids. And it’s not an inappropriate feeling, says Cassandra Goldie, the head of the Australian Council of Social Service. “It doesn’t feel good and it shouldn’t feel good,” says Goldie, who is frustrated at the absence of support for low-income Australians during this phase of the pandemic.

Last year was a different story entirely. In fact, boosting welfare payments was our first line of economic defence in the early days of COVID-19. In his first economic stimulus package announced in early March last year, the Prime Minister unveiled $750 cash payments for approximately 5 million welfare recipients, including pensioners, the unemployed and families.

Ten days later, a second stimulus package unveiled the $550 a fortnight coronavirus supplement for existing welfare recipients, including those on JobSeeker, Youth Allowance and Parenting Payments. This effectively doubled the rate of JobSeeker.

At the time, the Prime Minister proudly declared: “We will be supercharging our safety net and supporting the most vulnerable to the impacts of the crisis, those who will feel those first blows.”

More than a year on and the blows keep coming. And they’re still hitting low-income Australians the hardest.

While JobKeeper eventually stole the headlines, it was this other support delivered direct to welfare recipients that was most notable about last year’s support, Goldie says. “We protected millions of Australians from falling into poverty. We did. And also that was cash into the hands of people on the lowest incomes who definitely spent it.” 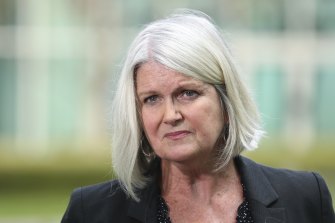 And it was popular: “Overall, the community welcomed the support. Political stakes went up, didn’t they? There was a moment there that, while we were in a crisis, we could be proud of what we did as a community together to look after everybody who needed help.”

This time around, it’s a different story and the divide between COVID-19 haves and have-nots is clearer by the day.

Today, JobKeeper is gone, but replaced by a state-based scheme to support businesses that do not reduce headcount plus a COVID-19 disaster payment for those who have lost work directly because of lockdowns.

For someone who has lost more than 20 hours work due to lockdown, it mimics the old JobKeeper payment rate of $750 a week.

But there’s a big gaping hole. Existing welfare recipients are excluded from the payment, unless they gain employment during lockdown and then subsequently lose it again due to lockdown.

This time, there are no one-off cash boosts. No increased income support. Nothing for the lowest income Australians.

JobSeeker recipients are back to surviving on $315 a week, which Goldie describes as “poverty level”, forcing many to look for side income. “People are forced to go out and work in conditions and environments where it does increase your risk of contracting COVID.”

Goldie says disaster payments should be extended to all people on social security in locked down areas, to ensure a single person in a private rental has at least $600 a week on which to survive.

She also wants job search obligations relaxed and eviction moratoriums and rental subsidies for tenants. “The current income supports are inadequate and have gaping holes that did not exist in the 2020 lockdowns,” she wrote in a letter to national cabinet last week. “People on the lowest incomes have no additional support and have been left in desperate circumstances. Women and children are particularly at risk.”

Without further support, it appears Australia’s long-term trend towards rising income inequality is set to continue, and even accelerate because of the pandemic.

Last year is looking like a blip, says Roger Wilkins from the Melbourne Institute of Applied Economic and Social Research. “Last year the net effects of the shutdowns and government income supports in response to them actually reduced income inequality. This year, it is less clear because the income supports have been less generous.” Meanwhile, Wilkins says surging home and sharemarket values are accelerating wealth inequality again.

Looks like we’re heading back to business as usual, in more ways than one. And no, it doesn’t feel great.

Stay across the most crucial developments related to the pandemic with the Coronavirus Update. Sign up for the weekly newsletter.