Amway maintains the action was related to a case in 2011 and it has been cooperating with the investigative agency. 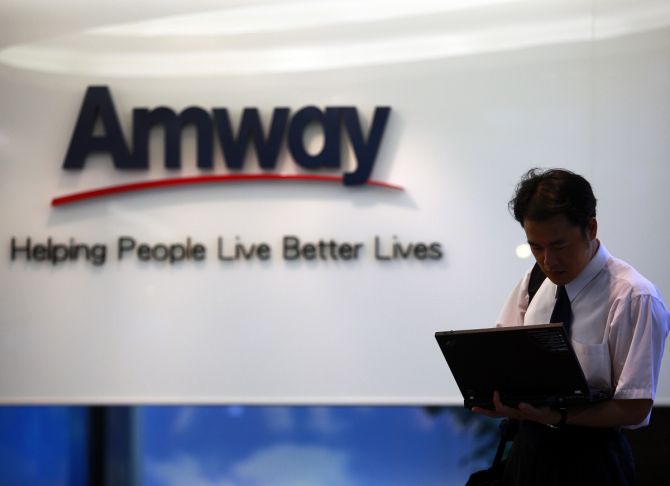 Here’s a look at why the ED took this step and why the Amway model came under scrutiny.

Why did ED freeze Amway India’s assets worth Rs 757 crore?

The ED alleged that Amway was running a pyramid scheme fraud in the guise of direct-selling multi-level marketing.

It also argued that prices of most products offered by the company were exorbitant compared to alternative popular products of reputed manufacturers available in the open market.

The company maintains the action was related to a case in 2011 and it has been cooperating with the investigative agency on the issue since then.

What is the genesis of the problem between Amway and other direct-sellers and the government?

Direct-sellers like Amway have from the beginning been asking for a monitoring law under which the differentiation between direct-sellers like them and fraudulent structures like pyramid and money circulation schemes is clearly established.

Between 2009-2016, the government set up several inter-ministerial committees and groups to address the concerns of the direct-selling industry.

However, due to lack of clarity on which law should regulate direct-selling companies, many, like Amway India, were hauled up under the Prize Chits and Money Circulation Schemes (Banning) Act, 1978, which is meant to ban such schemes mostly in the financial services space.

This led then Amway India CEO and MD William Pinckney, who had been arrested twice on various charges, to publicly say that they don’t run a chit funds scheme but an FMCG company.

There was also debate on whether multi-level marketing is legal.

However, that issue was resolved as most consumer businesses and FMCG companies have a multi-level marketing structure — company, wholesalers, distributors and then retailers.

So, what is the difference between ‘direct-selling’ and a ‘pyramid scheme’?

In 2016, the ministry of consumer affairs came out with a model framework of guidelines for states for the first time on direct-selling companies that were involved in multi-level marketing.

The guidelines made a clear distinction between such companies and those running pyramid schemes.

Under the guidelines, direct-selling companies were not supposed to run a pyramid scheme in the guise of multi-level marketing.

Currently, 17 states have adopted and implemented these guidelines.

The guidelines defined direct-sellers as those appointed or authorised directly or indirectly by a direct-selling entity through a legally enforceable written contract to undertake direct-selling business on principal-to-principal basis other than through a permanent retail location.

The intent was that the direct-sellers would get paid on the sale of products and the compensation would be paid from the revenue of the sales. This is the model Amway claims it follows.

A pyramid scheme was defined as a multi-layered network of subscribers in which subscribers enrol more subscribers to accrue benefits.

In this model, the participant who joins the earliest makes most money, while those who join later make the least.

Unlike in a pyramid model, in direct-selling there is no such provision that a direct-seller will receive remuneration or incentives for recruiting new participants.

The remuneration is based solely on the sale of goods and services.

Two, in direct-selling there is no entry cost, unlike in a pyramid scheme where there is a hefty joining or registration fee.

Amway does not charge a joining or registration fee.

Three, direct-sellers are not mandated to make periodic purchases unlike in a pyramid model where they have to.

In this respect, too, Amway follows the direct-sellers’ way.

Four, direct-selling companies also have a licence to sell or own trademarks of products promoted by them (which Amway does).

In pyramid schemes, one can offer products without having any such licence to sell.

Did the guidelines resolve the problem?

Only partially. In 2019, the government notified the Consumer Protection Act, which incorporated the concept and meaning of direct-selling by providing a definition.

The Act came into effect in July 2020. In November 2019, the government came up with the Draft Consumer Protection (Direct Selling) Rules 2019 for public consultation, which was followed by two more revised drafts after discussions with stakeholders.

After two years of consultations, the government notified the Consumer Protection (Direct Selling) Rules 2021, which came into effect on March 27, 2022.

Did these 2021 rules satisfy the direct-selling industry, which has been lobbying for a clear distinction between a direct-sellers-based multi-level marketing model and those using a pyramid structure?

The direct-selling industry says the Consumer Protection (Direct Selling) Rules, 2021 have not incorporated the definition that was there in the draft discussion.

The ‘direct selling network’, it had said, is formed by a direct-selling entity and includes a multi-layered network of direct-sellers in which such sellers introduce or sponsor further levels of direct-sellers and whereupon support them in order to receive any benefit. And such benefit is solely as a result of sales of goods and services.

This, they say, clearly differentiates them from a pyramid structure.

The department of consumer affairs is now working towards bringing necessary amendments to the 2021 rules, but the final outcome is not yet known.