New York (CNN Business)A few weeks ago, Jim and Katie DiGangi started dumping up to 20,000 gallons of milk a day.

The couple runs Darlington Ridge Farms in Wisconsin. They’ve never had to dump milk before, and the practice has been “completely devastating,” said Katie. “It’s very challenging for our family.”
Dumping milk is pretty much what it sounds like: Disposing of milk before it is delivered to processors and turned into dairy products. Recently, farmers like the DiGangis have had to resort to milk dumping because of a precipitous drop in demand from schools, restaurants and other food service providers, which have been mandated to close their doors to stop the spread of the coronavirus pandemic.

The sudden shift in demand means that dairy farms across the country have an excess of milk. Between 2.7 million and 3.7 million gallons of US milk could be dumped per day as a result of the crisis, the Dairy Farmers of America, a major dairy co-operative, estimated. But farmers can’t just stop milking their cows.
“Dairy is a daily crop,” said Alan Bjerga, senior vice president of communications for the National Milk Producers Federation. “When a young milk cow gets put into production, you don’t turn the production on and off. And so it’s very difficult to be quickly responsive to a crisis.”

Milk dumping isn’t just devastating for the farmers. For Americans who can’t afford food or are unable to buy enough milk because grocery stores are out or capping purchases, the images are painful. 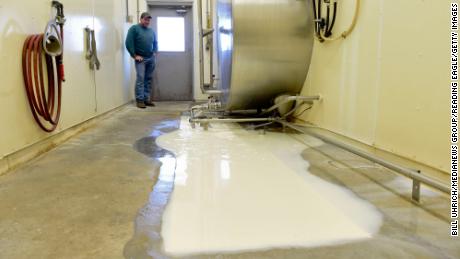 Pouring out milk is another example of how major disruptions in the supply chain, caused by the pandemic and efforts to contain it, are preventing food from getting to where it needs to go.
The pandemic has delivered a major blow to several sectors, from the airline industry to retail. For the milk industry, the setback is particularly painful.
Both dairy farmers and milk processors were struggling even before the pandemic hit. Such a major disruption has only made things harder. And the rigid supply chain means neither farmers nor processors can switch gears quickly enough to avoid waste.
Nobody wants to dump milk. But doing that now -— along with other efforts -— could help farms pull through later on, and could help make sure that Americans have enough milk, cheese, butter and ice cream in the future.

Before the pandemic hit, things were finally looking up for milk farmers.
By the latter half of last year, prices were starting to trend higher after about four years of low milk prices. It’s not unusual for milk prices to ebb and flow, but the stretch between 2015 and 2019 was a particularly difficult one, exacerbated by retaliatory tariffs from China and Mexico in 2018.
“We had experienced the price milk crisis as an industry,” said Jim DiGangi. “There was a shining light at 2020. It was going to be our rebound year.”
Despite an uptick in prices, those four years took a toll on the milk industry. By the time the coronavirus pandemic took hold in the United States, many dairy farmers were already in a precarious financial position.
“People have burned up a lot of their equity to stay in business,” said Dave Kyle, owner of Kylecrest Holsteins and Jerseys in Wisconsin and a director of his dairy cooperative, Foremost Farms USA.

When Kyle, who saw demand starting to fall off a cliff, asked co-op members to cut back production in mid-March, many balked. “They’re like, ‘We can’t. We just can’t survive if we cut back,'” he said.
In addition to financial fears, there are those practical reasons to keep milking.
Farmers could take steps to reduce the amount of milk each cow produces or cull their herds. But that would mean less milk overall, which could lead to dairy shortages down the road. Plus, with demand so volatile at the early stages of the crisis, it’s been difficult for dairy producers to get a sense of what it will look like in the future. 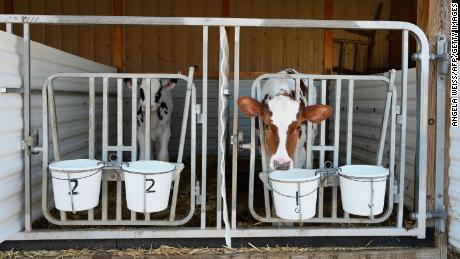 “That phenomena of keeping cows in the herd so that they are here when we need them in a few months, but not being able to use their milk — that’s what is manifested as milk dumping,” said Marin Bozic, an assistant professor at the University of Minnesota’s applied economics department. “It’s a sad picture, but it’s optimal as long as this crisis doesn’t stay with us for too long.”
Milk dumping is the last resort for dairy farms, said Dennis Rodenbaugh, president of council operations for Dairy Farmers of America. But, “it can be the least-cost option, at least in the short term,” he explained. If there is no end market for milk, turning it into cheese or butter and then disposing of it would be a more expensive proposition for the processors, which are sometimes also owned by dairy farms or co-operatives.

Dairy farmers aren’t the only only ones dealing with huge amounts of uncertainty. Processors are too.
Not all dairy processing plants do the same thing. Some pasteurize fluid milk, while others take raw milk and turn it into cheese, butter or ice cream. And some serve food service providers, like school cafeterias or restaurants, while others sell to big consumer goods companies or retailers.
It’s possible for processors to switch gears, but it takes time.
For Borden, one of the country’s largest milk processors, the drastic shift in demand was a major disruption.
“About a third of our total production goes to either schools or restaurants,” said CEO Tony Sarsam.
“I have dedicated lines to run school milk,” he said. “And we have dedicated routes that deliver to schools.” In mid-March, “we almost instantaneously lost the vast majority of both of those,” he said.
Retail demand has gone up as consumers stock up on staples and cook more of their meals at home. “It’s been quite a juggling act” to readjust, said Sarsam. Borden has transitioned many of its production lines to serve grocery stores. But the shift hasn’t been enough to offset Borden’s losses. Milk gallon production has fallen by about 25%, he said. And even though the company is giving milk away to the needy, it still isn’t able to make up that new production gap.
The company has donated over 700,000 servings of milk to food banks, homeless shelters and other charities, Sarsam said. But those places have their own capacity constraints and can’t take more than they can refrigerate and distribute.
With demand down by that much, it doesn’t make sense for Borden to take as much milk from farmers as it used to.
Like the dairy farmers themselves, milk processors were also struggling prior to the pandemic. Borden filed for bankruptcy in January, explaining at the time that it could not afford its debt load and pension obligations. Capacity limitations and the difficult financial situations mean that processors like Borden can only accept so much milk.

Dairy groups are scrambling to figure out ways to prevent more milk from going to waste without further harming the industry.
The National Milk Producers Federation and the International Dairy Foods Association have estimated that supply exceeds demand by at least 10% and have asked the USDA to provide financial incentives to dairy farmers to reduce their supply by that much for about six months. They’ve also asked the USDA to compensate dairy farmers for the discarded milk for about three months.
The groups are asking the government to purchase dairy products and donate them to food banks, a way to both feed people in need and prevent demand from plummeting further.
Those steps, among others, could help stabilize the dairy sector and reduce dumping.
Rodenbaugh, from the Dairy Farmers of America, said that the co-op is also working with food brands to try to increase their use of dairy products. One way to do that: Cheesier pizzas. 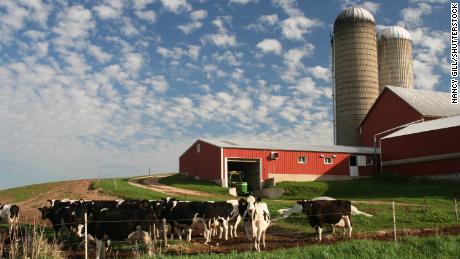 “Right now we have consumers that are stuck at home,” he said. “They’re feeling life’s a bit bland. How can we add flavor?”
If pizza makers add more cheese to their pizzas, they could help provide a new home for excess milk.
In addition to pizzerias, “we’re also asking all food suppliers to take a look at how they can add an ounce. Add an ounce of cheese to every burger, every taco, every sandwich. It will make a tremendous difference in the utilization of the milk,” he said.

Travis Fogler, CFO and dairy operations manager of Stonyvale Farm, is hoping that more time at home might help consumers return to habits they’ve abandoned, or hold on to new ones, like baking.
“I think there is a light on the other side,” he said. “We’re hoping as an industry that as people have been home, spending more time with their family, eating cereal for breakfast again because they have time to and drinking fluid milk, that on the other side of this maybe that will last and we’ll see an increase in demand,” he said. “As we readjust to whatever this new normal is, we’re hoping that dairy can be a plus and can become part of people’s lives again.”
Source: Read Full Article