London (CNN Business)The UK government could ask the military to deliver gasoline to service stations after a shortage of tanker drivers forced some to close last week, triggering a spate of panic buying by British motorists.

With thousands of service stations running dry, the government announced a series of emergency measures over the weekend to address the fuel crisis, including issuing temporary work visas for up to 5,500 foreign truck drivers and suspending competition law to allow suppliers to deliver fuel to rival operators.
UK media reported that Prime Minister Boris Johnson would consider calling in the army on Monday if the situation shows no sign of improving.

“We have no plans at the moment to bring in the army to actually do driving but we always have a civil contingencies section within the army that’s always on standby should they be needed,” Environment Minister George Eustice told reporters on Monday. “We don’t judge that’s necessary at the moment.”

The Automobile Association (AA) appealed for calm on Friday after BP (BP) was forced to temporarily close some of its stations for the second time in as many months because of the driver shortage. Yet many Brits paid little heed, flocking to service stations in hopes of securing fuel for the week ahead. 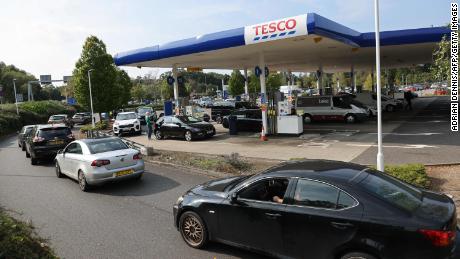 The Petrol Retailers Association, which represents independent fuel suppliers, told the BBC that as many as two-thirds of the 5,500 service stations operated by its members were out of fuel, with the rest of them “partly dry and running out soon.” Social media users have reported long lines at stations across the country, and some motorists on longer trips have been forced to abandon their cars after running out of fuel.
Companies including ExxonMobil (XOM) and Shell (RDSA) said in a statement released by the government on Sunday they wanted to “reassure the public that the issues that have arisen are due to temporary spikes in customer demand, not a national shortage of fuel.”
Worker shortages are a growing problem in Britain, which has a record 1 million job vacancies. The shortage of truck drivers has been exacerbated by the pandemic and Brexit, which resulted in tens of thousands of EU nationals leaving trucking jobs and other occupations in the United Kingdom.
According to the Road Haulage Association, the United Kingdom is short around 100,000 truck drivers. Last month, the UK government said that “most of the solutions” to the crisis would be driven by industry, and that it did not want to rely on workers from outside the country.

Ruby McGregor-Smith, the president of the British Chambers of Commerce, said the decision by the government to offer 5,500 temporary visas to foreign truck drivers was insufficient, comparing it to “throwing a thimble of water on a bonfire.”
“Without further action, we now face the very real prospect of serious damage to our economic recovery, stifled growth as well as another less than happy Christmas for many businesses and their customers across the country,” she said in a statement. 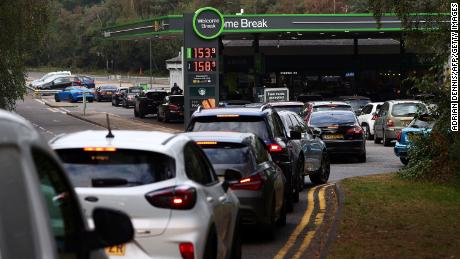 Johnson is preparing to deploy hundreds of soldiers to help address the fuel crisis, the Financial Times reported on Monday. The troops would be used to drive trucks, the newspaper said, under contingency planning known as “Operation Escalin.”
Brian Madderson, chair of the Petrol Retailers Association, said that calling in the military alone won’t be enough to resolve the crisis because soldiers may not have the training needed to refill storage tanks at service stations.
“It’s not an absolute panacea,” he told BBC Radio. “There is no one single lever which is going to be pulled by government and industry together which is going to sort this situation.”
BP said in a statement on Sunday that it was seeing “intense demand” and that roughly 30% of the 1,200 sites its supplies across the UK did not have either of the main grades of fuel. The company said it was “working to resupply as rapidly as possible.”
Shell welcomed the government’s action on Monday, saying it’s “been seeing a higher than normal demand across our network which is resulting in some sites running low on some grades. We are replenishing these quickly, usually within 24 hours.”
Sainsbury’s (JSNSF), which operates service stations at some of its supermarkets, said “we’re experiencing high demand for fuel. We’re working closely with our supplier to maintain supply and all our sites continue to receive fuel.”