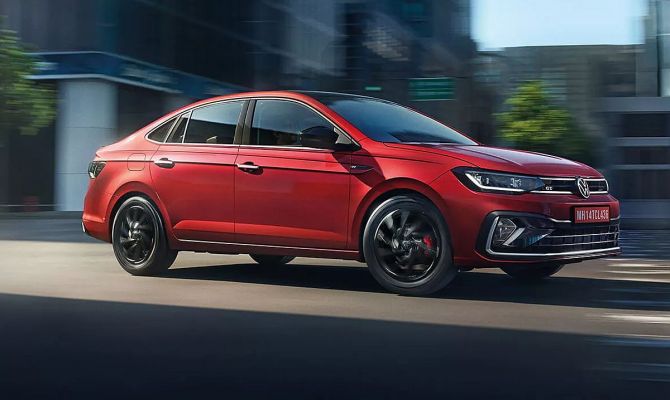 “Customers don’t expect anything less than a premium product from VW.

“Customers expect a certain level of quality and driving dynamics. We have to stay true to that DNA.

VW’s reason to stay away from the hatchback segment is also driven by India’s taxation structure.

Sub-4-metre cars with engines under 1,200 cc in petrol and 1,500 cc in diesel are categorised as small passenger vehicles and fall under the 28 per cent goods and services tax bracket.

Vehicles not meeting this criterion are taxed higher, leading to a rise in price of the end-product.

“In the long run, it has to be about business economics. You can only have a sustainable future if you are profitable, and for financing future investments,” says Gupta.

VW is betting big on sedans to drive growth.

Its latest India roll-out, the Virtus is a premium mid-sized sedan.

The mid-sized sedan segment had a market size of about 95,000 cars last year, of the total car volumes of just over 3 million.

Gupta expects the Virtus and group company Škoda Auto’s Slavia to expand this market to 140,000-150,000 units this year.

This is, however, in contrast to the current market dynamics where carmakers are responding more to customers’ growing love for SUVs.

“No doubt the SUV body style has been becoming popular globally, but it is actually the hatchbacks at whose cost the growth in SUVs has happened,” says Gupta.

He says for the past three years, the sedan body style has stayed more or less constant, cornering 11-12 per cent of the market.

“Everybody is focusing so much on SUVs that the sedan body style has basically been ignored.

“This is where I see a big opportunity for a product with European lineage actually making a difference in that segment,” he adds.

The Virtus is the second product under the India 2.0 project developed on the MQB A0 IN platform with up to 95 per cent localisation levels.

MQB stands for Modularer Querbaukasten, or modular transversal toolkit. It lays down a series of hard points for a huge range of cars and powertrains.

These hard points determine the common design of the production line.

In February, the company registered a growth of 84 per cent year-on-year in sales, primarily riding on the Taigun launched last year.

In late 2019, it announced a massive structural and operational overhaul worth €1 billion — one of the biggest investments in the Indian auto sector.