A family man, a confident investor, someone who was sure two decades ago that India and its stock market were going to boom.
T N Ninan recalls his chats with Rakesh Jhunjhunwala.

If I recall right about an episode nearly two decades ago, the occasion was a discussion of Raghuram Rajan’s book Saving Capitalism from the Capitalists, at Mumbai’s Taj Mahal Hotel.

Suddenly, from off to one side of the hall, an extra loud voice erupted to say that India and its stock market were going to enjoy a boom like never before.

It was out of context and out of place.

It turned out that the voice belonged to one Rakesh Jhunjhunwala, whom I met some time later over a drink.

Correction: Several drinks, and then some, at his favourite bar Geoffrey’s in South Mumbai.

In a one-sided conversation typically laced with expletives, and punctuated by several colourful aphorisms that likened the stock market to women, Rakesh held forth on the reasons for his conviction about the coming Indian boom.

His optimism flowed from basic insights, nothing profound.

But he had already made a small fortune (1,000 rupee notes from a thick wad were dished out at the end of the evening), which, as things turned out, was nothing like what was to come.

As I was to discover, Rakesh often spoke excitedly at the top of his voice.

He wasn’t always coherent about his stock-picking strategy, speaking only tersely, but that may have been deliberate.

The only time he called to give me investment advice (“buy Tata Motors”), I didn’t take it.

He messaged later to tell me how much the company’s share price had climbed, just so that I wouldn’t forget.

For a man who made more money on the stock market than almost anyone else, he was endearingly enough more optimistic about India than about the market, keener to talk about the country than his wealth.

His political views veered towards strong Hindu assertion, and as usual neither his language nor his gestures were restrained.

That I considered his political views half-baked made no difference to him; he would have his say.

Interestingly, his donations to good causes were politically colour-blind. 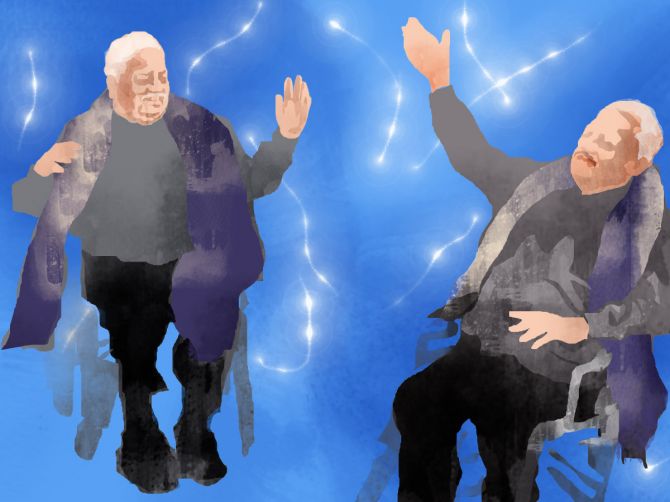 Still, with the airline Rakesh the investor had finally become an entrepreneur.

He was very much a family man. His father and wife featured often in his conversation.

He wanted desperately to have children and was overjoyed when he got them.

He loved films and financed a few; his seated dance despite being bound to a wheelchair on his 60th birthday has gone viral after his passing — and is lasting proof of his zest for life.

He bought a big plot of land on Malabar Hill and built a mansion, but he had also started to give generously and said he wanted to do more.

He trusted people. He declined to visit the university that he had funded, saying it had people to run it properly.

He claimed he had given 40 per cent sweat equity to key people at his Akasa Air.

“They have enough of a stake, so I don’t have to worry. I don’t want to answer to anyone.” Staying true to that, he always invested only his own money.

His close friend, the contrapuntally soft-spoken Radhakishan Damani, had charted the path before him.

They had met by chance on Dalal Street before Mr Damani started the DMart retail chain, which now has a market value of Rs 2.8 trillion.

Mr Damani’s share in that puts Rakesh’s own astonishing wealth in perspective.

In an interesting conversation, Rakesh once said his community owned the country.

Asked to explain, he said he was from the Agrawal clan of the Banias, as were people from the Jindal, Bansal, Goyal, Mittal, Singhal and several other gotras.

Then he reeled off a long list of well-known tycoons, all Agrawals, and asked: “So, boss, do we own the country or not?”

Our final meeting was in Delhi, where he had come to meet political bigwigs from the prime minister downward.

At lunch, to which he had invited Shekhar Gupta and me, he was in his wheelchair and in poor shape.

He insisted that his medical indicators were good, but the old fire was missing and an attendant appeared periodically to give him pills.

One left with a sense of foreboding about this larger-than-life figure.