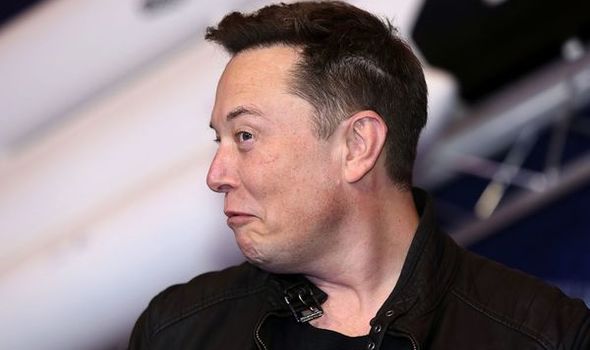 Over the weekend Mr Musk tweeted to his 62.8 million followers that he proposed selling 10 percent of his Tesla stock and invited them to take part in a poll to decide. Over 3.5 million votes were cast with yes winning by 58 percent. The Tesla CEO also added “I will abide by the results of this poll whichever way it goes.” Tesla’s shares nosedived around 9 percent on its Frankfurt listing this morning. Over in the US pre-market prices were down around 6 percent.

Mr Musk owns a 23 percent stake in Tesla which has risen to become the world’s most valuable car company.

According to calculations by Reuters a 10 percent sell-off of his shares would amount to around $21billion (£15.55billion).

Such a major offloading would have serious implications for investors and the company’s share price.

AJ Bell Investment Director Russ Mould said: “Investors may look at the situation and try and sell before he does, potentially then buying back at a lower price if they still liked the stock.”

“It’s also an open invitation for short sellers to place a bet that the shares will fall, generating a profit for them if the stock does decline in price.”

He added: “Some investors might be taking Musk’s comments with a pinch of salt.

“He has often made comments on Twitter, implying one thing and then doing the opposite soon after.

“For example, he said Tesla would accept bitcoin as payment for its vehicles but then reversed course by saying the company wouldn’t take such payment.

“It’s highly unusual for a business leader to canvas social media for opinions over share ownership but Musk has always liked to do things in the public eye.”

Mr Musk’s Twitter use has previously triggered share price changes in other companies such as Etsy and Signal as well as in cryptocurrency markets.

Earlier this year an Elon Stocks app was launched which notifies its users whenever he mentions a stock in a tweet.

The share sell-off poll came following proposals in the US from Democrat senators to introduce taxes on shares held by billionaires payable when the shares go up in price.

Thought to target around 700 of the richest Americans revenue would help pay for Joe Biden’s proposed increases in public spending aimed at health, social care and climate change.

In response to Mr Musk’s poll Ron Wyden, one of the senators supporting the proposed tax, replied on Twitter saying: “Whether or not the world’s wealthiest man pays any taxes at all shouldn’t depend on the results of a Twitter poll.”