Adam Ryan, 31, has worked at Target in Christiansburg, Virginia, for three years. He works additional jobs whenever he’s able to, but is regularly scheduled only 20 hours per week at Target, despite having open availability.

“I have to live with my family because I can’t afford rent on my own. I don’t have health insurance. I’ve had a rotting tooth in my mouth for years that I haven’t been able to receive treatment. I’ve applied for medicaid in Virginia and every time I’m told I make too much money, and Target has told me I don’t qualify for their benefits because I don’t get enough hours,” said Ryan, who is also an organizer with Target Workers Unite, an independent initiative of Target workers.

But Ryan and several other Target workers have noted a drastic reduction in scheduled hours and significant increases in workloads as Target has increased their minimum wage and rolled out a “modernization plan” in 2019 to increase efficiency. They think that broader influences in the retail sector are responsible for their plight – notably, the actions of their hard-charging rival Amazon.

“They’re responding to what Amazon is doing,” Ryan added. “They are trying to turn these stores into their own distribution centers, using brick and mortar stores. We have to be warehouse workers and customer service workers.”

Target Workers Unite recently released a survey of over 500 Target workers around the US, representing 382 different stores in 44 states. Only 12.7% of the workers who responded said they could survive on the wages from Target alone, with 56% of workers citing they have ran out of food while employed at Target, and 12.8% of workers reported experiencing homelessness. 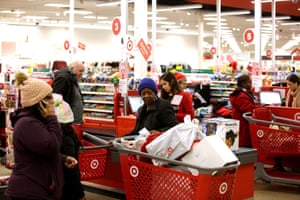 The survey also provides some insight into Target’s opposition to workers organizing. Some 54% of workers surveyed report management telling them not to discuss wages with other workers and 41.6% of workers report workers have been reprimanded by management for discussing workplace issues in the store or on social media.

As Target workers report struggling to make ends meet while experiencing cuts to their schedules, loss of benefits, and increased workloads, Target reported record share prices at the end of 2019. CNN Business ranked Target CEO Brian Cornell their top CEO of 2019, citing the retail chain consistently beating predictions of sales and profits in 2019 and finding a balance between physical stores and digital commerce. The retail chain is ranked the eighth largest retail corporation in the US based on sales.

In Harrisburg, Pennsylvania, Bonnie Furlong has worked as a cashier at Target for about seven years, but still makes what starting workers make, $13 an hour.

“The last time they raised it, they cut our hours, so I’m basically making less than I was before they raised it to $13 an hour,” said Furlong. Her hours were reduced from 32 to 38 hours per week to around 20 hours per week. “If I wasn’t getting social security, which isn’t very much either, I wouldn’t be able to work there because I couldn’t afford it.”

Matt Funnell, a Target employee in Massachusetts since August 2018, saw his weekly schedule change from full-time, over 30 hours a week, to less than 10 hours in January 2020.

“My biweekly paycheck doesn’t even pay rent. Co-workers of mine are losing health insurance and other benefits,” he said. “My higher-ups still expect us to get the same amount of work done in a fraction of the time.”

Marie Biggs of Dallas, Texas, quit her job at Target in July 2019 after 14 years due to the scheduling cuts and increased workloads.

“I was full time, 40 hours a week as a receive. My hours were cut down to 27 hours a week in 2019,” Biggs said. “I planned on retiring from Target. They more than doubled my workload, cut my hours. I lost my benefits after averaging less than 30 hours a week and they didn’t seem to care. I couldn’t live on it.”

Several current Target employees interviewed for this story were reluctant to speak on record for fear of retaliation.

A Target worker employee in Florida for six years also reported drastic cuts to their schedule.

“This year I am losing my health benefits in March because of cut hours and I recently found out I am pregnant so I’m stressed out about it all. I am given 8 hours of work to do in a 4.5 hour shift and expected to get it all done,” they said. “I went from 40 hours a week to 15 hours in January 2020.”

In Houston, Texas, a Target employee told the Guardian the modernization plan has significantly increased workloads that aren’t feasible to complete in the time they’re scheduled.

“I can’t get anything done in 12 hours. I can’t pay rent either. They’re trying to minimize the workforce but maximize what gets done, and it’s causing issues,” they said. “ I have two jobs to make ends meet on top of college. I don’t really do anything other than work anymore, but they keep us dangling on a string.”

Target disputed the workers’ survey’s finding and claims from workers over working conditions and schedule cuts.

“Every year, we survey hundreds of thousands of team members and consistently hear from our team that they’re satisfied with the pay, benefits and experiences they receive from Target,” said a Target spokesperson. “We also have a long history of investing in the more than 360,000 team members who come together to serve our guests, which includes a commitment to industry-leading wages, scheduling practices that balance our team members’ availability with our business needs, and employee engagement that is well above industry averages.”