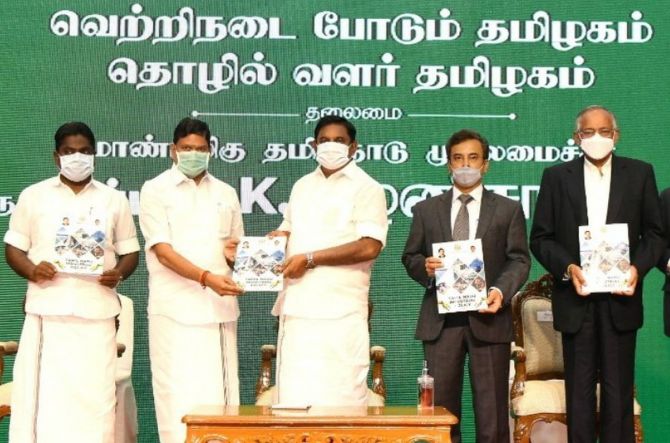 Through the new Industrial Policy 2021, the TN government hopes to attract Rs 10 lakh crore in investment in four years and create employment opportunities for 20 lakh people by 2025 in the state.

Among the numerous benefits, the policy encourages investors to choose their structured incentive package model providing for higher flexibility.

Apart from encouraging balanced regional industrial development, the policy encourages higher participation of women, differently abled and transgenders in the workforce, according to the policy document.

Speaking on the occasion, the chief minister said the industrial policy would further reinforce Tamil Nadu as an ideal global investment destination while the MSME policy would give a further fillip to entrepreneurs in the next five years.

“Several concessions including land at 50 per cent discounted price, will be provided to entrepreneurs starting ventures in the 22 industrially backward districts, including the southern districts, Dharmapuri, Perambalur and Nagapattinam,” Palaniswamai said.

The MSMEs’ capital subsidy will be increased to Rs 1.5 crore from the present Rs 50 lakh, he said.

The state has attracted a total investment of Rs 6.85 lakh crore in 10-year period, he said.

The chief minister also laid the foundation stone for six industrial estates of TANSIDCO in various districts that would help generate employment to 13,300 people, besides SIPCOT’s four new industrial parks on 3,977 acres at Manapparai, Manallur, Oragadam and Dharmapuri.

He also inaugurated eight completed projects with an investment of Rs 3,377 crore and an employment potential for 7,139 people, an official release said.

Also, MoUs for 28 projects entailing an investment of Rs 28,053 crore were signed.

These projects, including a Rs 4,684 crore project to manufacture mechanical enclosures for mobiles phones by Tata Electronics project in Krishnagiri, announced earlier, will create employment for 68,775 people, a release added.