Home » SCOTT GALLOWAY: The world is still in the grip of a major crisis. With the right investment, the United States has a clear opportunity to save millions of lives.

Seventy-five years ago, the world was ravaged by the defining crisis of the 20th century. Tens of millions died, societies were shattered, and geopolitical power plates experienced tectonic shifts. Of the world’s great powers, only one emerged relatively unscarred, with its innovation, leadership, and manufacturing stronger: the United States. America seized the opportunity to extend a hand of unprecedented strength and generosity to its allies and former enemies. It poured aid into their economies, dispatched expertise, and invested in treaties and global organizations on a historic scale.

This was enlightened self-interest, and altruism … which are not mutually exclusive. Through these programs, the US reconstructed the roads, factories, businesses, and even cultures of other nations in its own image. The US shaped enduring alliances with the most innovative economies in Europe and Asia. The result has been nearly a century of prosperity and (relative) peace.

Read more: SCOTT GALLOWAY: Divorce brings you face-to-face with your flaws and is seen as an admission of failure. It needs a rebranding.

From crisis to opportunity

Today, we face a similar crisis, and a similar opportunity.

The crisis is clear. As Americans unmask and return to Disneyland, the pandemic is tightening its grip elsewhere. The University of Washington estimates that in India the true daily death toll is nearly 13,000. In Brazil, the pandemic has killed half a million and counting. In both countries, health-care workers have died by the thousands, and the social-support infrastructure is collapsing. 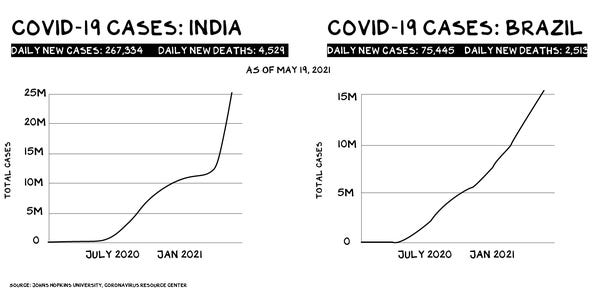 The opportunity is clear — for the United States to demonstrate the might of American capitalism and character. It’s time for a second Marshall Plan, a global investment in the fight against COVID-19 with the world’s premier health-care professionals and superior vaccines. Staunching the pandemic in India and Brazil could save millions of lives. Millions.

As in the recovery from World War II, this would reflect both altruism and enlightened self-interest. The longer the virus is allowed to reproduce, the more likely it becomes a permanent scourge. On the Prof G Pod this week, my guest was historian and author Niall Ferguson, who was emphatic about this: “The failure to have a coherent global strategy for vaccination is going to cost us all in the end.”

These investments could forestall a catastrophe and cement future prosperity. Both India and Brazil are among the top 10 economies, and the largest in their respective regions. India is the world’s fastest-growing major economy, a swing vote between the US and China on economic and political issues, and a key part of the global tech stack. Boasting the second-highest number of enrolled STEM students in the US (just after China), it’s an increasing source of senior leadership, including the CEOs of Google, IBM, and Microsoft. At NYU, where I teach, many of the brightest minds and best teachers are from one place: India.

Coming to the aid of Brazil and India (and ultimately, of other countries in crisis) will define 21st century global leadership. This time, however, it’s not the United States answering the call, but China. China, not the US, is vaccinating the world. According to tracking done by science analytics company Airfinity, China has already exported 252 million vaccine doses pursuant to purchase agreements with 44 countries and donated another 17 million doses to 60 countries. And it has dispatched medical teams to 27 foreign countries to aid their response to COVID-19.

US manufacturers, by contrast, have shipped a mere three million paid-for doses to Mexico and Canada. And while President Biden has promised to donate 80 million doses abroad, not one has shipped.

The vaccine gap reflects a larger trend: a slow ceding of leadership by the United States. Nations secure their place in the world order — and secure the world order itself — through a triangle of global power: violence, innovation, and investment.

“Violence” may trigger a gag reflex, but it’s hugely underrated. Our 800 overseas military bases and nine carrier strike groups ensure that US companies can trust foreign regimes to honor their contracts, and protect our global financial and legal systems. But our lead is eroding — China has more ships and soldiers — especially on the cyber battlefields of the future, where we’re unlikely to ever enjoy the dominance we retain in the kinetic space.

Innovation in all fields drives domestic economic growth and draws capital and the brightest minds from abroad. We won the Cold War with movies and microchips, not tanks. Yet while Big Tech leaders mostly bear American brand names, they are global companies, dependent on foreign supply chains and immigrant talent, all the way up to the C-suite. And here too, China is on the rise, with R&D spending expected to eclipse ours in the near future. 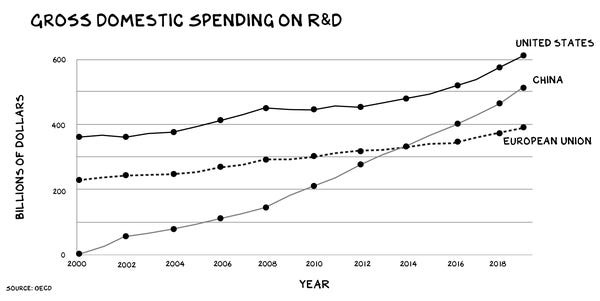 In the 20th century, the US led a revolution in great power strategy, investing billions across national and cultural borders, even rebuilding former foes. We continued that tradition through development aid, and by leading the fight against scourges like smallpox and AIDS. But in recent years our role has diminished: We give less in foreign aid than any other rich country, as a percentage of GDP. China, meanwhile, is projected to invest over $1.2 trillion in 60 countries by 2027 through its “Belt and Road” initiative.

Pandemic relief presents an opportunity to reestablish America’s historic role as the “leader of the free world.” Ceding leadership of the recovery to China is not in the United States’ national interest, nor is it in the interest of the world community. China’s surveillance state makes Zuck look amateurish, and it is ruthless in using that power at home and abroad. America hasn’t been devoid of sin in its 80 years as a great power, but our crimes have come in spite of our ideals, as failures to live up to America’s promise. For China, repressive authoritarianism is the promise.

Rising to the occasion

The Biden Administration has announced plans to send 80 million doses of vaccines abroad, which is a good start, but just a start. The combined populations of India and Brazil alone total 1.5 billion. The administration has also committed $4 billion to Covax, the international vaccine initiative. If fully funded, Covax hopes to deliver two billion doses worldwide by the end of 2021, leaving billions of people unvaccinated; a petri dish for vaccine-resistant variants and a rolling humanitarian crisis of biblical proportions.

More is needed, and warranted. In 1944, we stormed the beaches of Normandy to save the world. In 2021, we need to storm the beaches of India and Brazil to further that same mission. 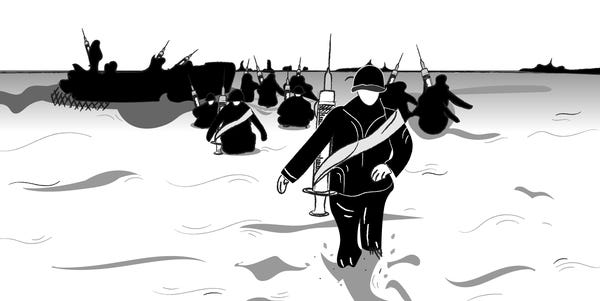 Patents are a linchpin. We should require patent holders to license their vaccines to all available manufacturers. Biden shouldn’t simply “support” the WTO’s waiver of patent protections on coronavirus vaccines, but instruct US Trade Representative Katherine Tai to hammer out the necessary terms. Pharmaceutical company resistance to this step is short-sighted — fair compensation for their formidable work is due, but the lawyers and accountants can work out the fees later. For now, the difficult and delicate work of manufacturing vaccines must take priority. Within three months of Pearl Harbor, all private automotive production had stopped in order to redirect attention toward the war effort. We didn’t waste time haggling over intellectual property and royalty payments.

Making a vaccine is not as simple as, in Dr. Fauci’s words, “making shoes” — it requires 200 separate components, many of which are manufactured separately around the world. But we don’t have time for excuses. Creative solutions are being deployed to streamline supply chains and share knowledge, and the US should be driving that effort forward with funding, expertise, and facilitation.

Every facility worldwide with the capability to manufacture vaccine components should be drafted into service. Domestically, the president should use the threat of the Defense Production Act to “encourage” manufacturers to invest in production capability with the active support of pharmaceutical companies. Abroad, ambassadors should be asking a single question: “What do you need?” We should also rejoin hands with our allies, recognizing that greatness is in the agency of others, and ensure Covax extends beyond COVID-19.

Once we have the legal, material, and monetary green lights on production, the US should tap into its human resources to expedite global vaccination. This means sending health-care and social workers, as well as other medical supplies and resources, to India, Brazil, and other nations to expedite the on-the-ground vaccination process. Additionally, the US could empower the Peace Corps, Doctors Without Borders, and other nongovernmental organizations with strong global networks (e.g., Latter-day Saints missionaries, 30,000 of whom were recalled at the start of the pandemic) to distribute vaccine-adjacent aid widely, efficiently, and with trusted hands.

This action — deployment of force, innovation, and investment — could cement the United States’ position as a global superpower, one that is both strong and benevolent. Yes, it will be enormously expensive and divert domestic resources from a waning but still deadly pandemic at home. In sum, this effort will come at great cost to our nation, and American lives could be lost.

Life is so rich,

P.S. Professor Beckman, one of my rock star professors at Berkeley Haas, is now teaching a Section4 Sprint (short-form, intensive strategy courses). Her Innovation Strategy Sprint teaches you frameworks and strategies to systematically leverage innovation principles to create value, regardless of your area of expertise or the size of your firm — register here.