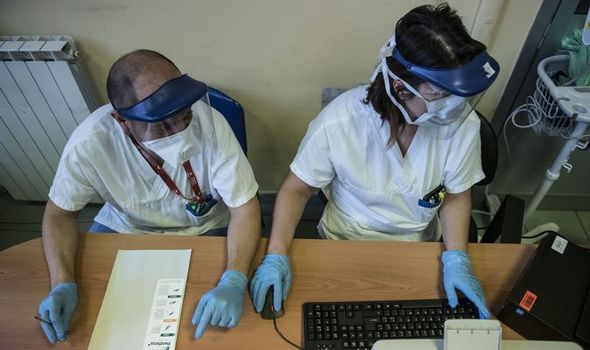 The stability did encourage investors to move away from the safety of the dollar that had previously sent the pound lower. However, fears that the virus was becoming a pandemic increased which could cripple global supply chains and cause serious economic damage.

Covid-19 could trigger recessions across the global economy, and president of Stenn Group, Dr Kerstin Braun stated: “We already know from our own research that half of the firms in the UK and US (46 percent and 45 percent respectively) predict a recession in 2020, while a further third (37 percent and 35 percent) predict a global recession this year. These predictions could very much become a reality if the virus isn’t contained and every week we’re seeing news of another countries’ GDP hit.”

While the main driver of the pound today was the slight recovery in risk appetite, investors are watching out for any developments in UK-EU trade negotiations.

Britain and the European Union are set to begin negotiations next week in order to achieve a post-Brexit trade deal by the end of 2020.

Due to a light economic data calendar, the focus will remain on UK-EU relations, and whether or not the two sides remain far apart on key issues.

RBC Capital Markets Global Head of FX Strategy, Elsa Lignos noted: “The two sides are far apart as a starting point and it remains to be seen how much progress they can make in the remaining nine months.”

Meanwhile, the US dollar weakened as traders moved away from the currency after increased expectations of a Federal Reserve interest rate cut.

Markets expect a rate cut this year would relieve pressure put on the American economy caused by the outbreak of Covid-19 in China.

According to currency analyst at MUFG, Lee Hardman, it is expected there will be “some downside risk for the US dollar” thanks to the potential dovish policy shift from the Fed.

The dollar was able to make significant gains earlier this week as traders viewed USD as the ultimate safe haven currency.

Although, many expect that unless there is good news about the spread of coronavirus, the dollar will not give back much of its recent gains.