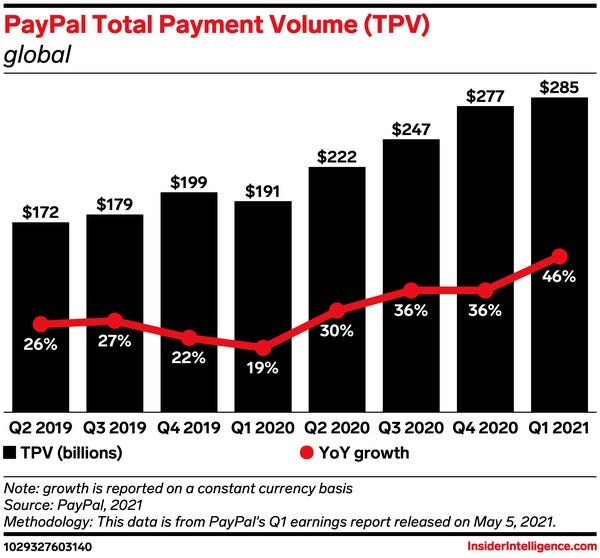 Recent results are a sharp increase from the same period last year, when TPV grew 19% YoY. The payments giant added 14.5 million net new active accounts (NNAs) in the period, bumping its total up to 392 million. By comparison, PayPal added 20.2 million NNAs in Q1 2020, 10 million of which were organic, with the remaining portion stemming from its Honey acquisition.

The payments giant revealed plans to launch a super app in Q3, which has the potential to turn PayPal from a nice-to-have app to a need-to-have app. Schulman described the app as an all-in-one platform that’ll provide customers with a “customized and unique shopping, financial services, and payments experience.”

PayPal’s ambitions sound similar to what Alibaba built with Alipay in China—but is now required to dismantle. Depending on the app’s specific offerings, it might have the potential to make PayPal the go-to destination for all consumer and merchant needs—which would solidify PayPal’s standing in the payments market and throttle competition.