As California Governor Gavin Newsom toured the wildfire damage in the Deer Park area of Napa County on Thursday, a new blaze, dubbed the Campbell Fire, broke out very close to the winery he co-owns with oil heir Gordon Getty.

His Plumpjack Winery off of Highway 29 near Oakville has been increasingly threatened over the past few days by the Glass Fire, which was ignited September 27 to the north, near Calistoga. The fire has scorched 57,000 acres and now stands at 5% containment.

According to the morning’s Cal Fire briefing, arms of The Glass Fire are now making two separate pushes, one south, the other east, toward Newsom’s multimillion dollar winery.

And more recently, a five acre fire dubbed The Campbell Fire has broken out about 2-3 miles from Newsom’s property.

There is also the giant, but mostly contained LNU Complex Fire just 10 miles or so to the east of Newsom’s property. That fire — which contains the once-separate Hennessy Fire — has scorched 391,000 acres and has been burning for 41 days. While the LNU Complex Fire is 98% contained, with a red flag warning declared through tomorrow night, the east/northeast winds being seen in the region would tend to spread the fire toward Newsom’s property.

This map indicates the current fire boundaries and the location of the Campbell Fire — the triangle — with respect to Plumpjack — the dot. 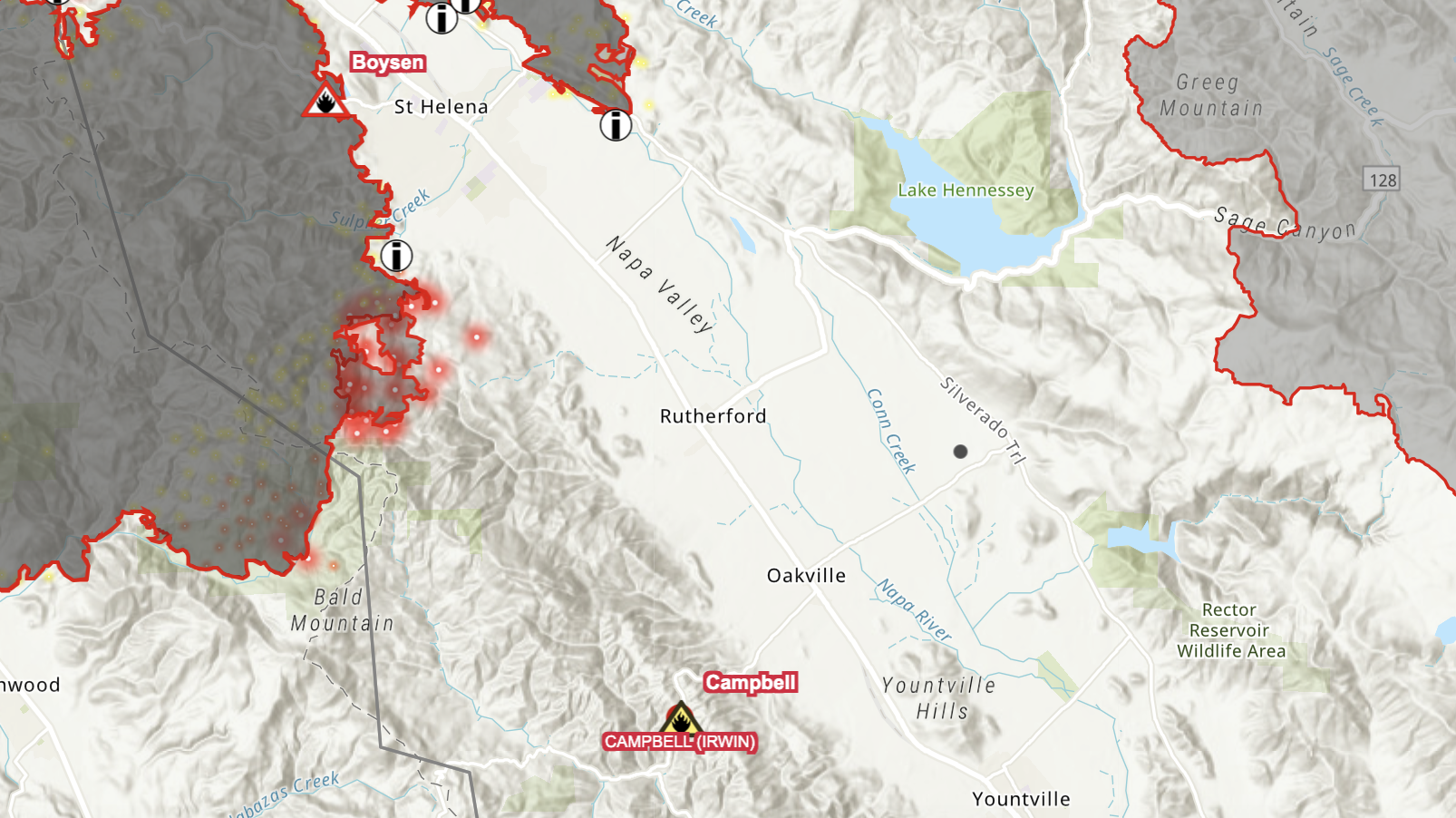 When asked about the threats to his property as he toured the damage, Newsom sought to refocus attention.

“It’s not just my private life before I got in politics, it’s my family here,” said the Governor. “I just left my cousin Mike. We have a lot of employees who live up here. We have people who have lost homes up here.”

Pushed for the status of his property, Newsom demurred.

“I have all these things in a blind trust. I don’t actively manage these things. I think it’s important to have a firewall there. But in regards to empathy, I have a deep empathy for the people dealing with these things.”

Indeed, the Glass Fire has destroyed over 240 structures in the area, among them many well-known wineries.

The fires spread as a red flag warning was issued in the area due to gusty winds and low humidity. It will remain in effect until Friday.

Ben Nichols, Cal Fire Division Chief Sonoma County said that, out of the dozens of major fires burning in the state, the Glass Fire was not the top priority.

“We are engaged in structure defence in multiple locations in the East Zone of the county,” said Nichols. “We are in a dynamic situation right now and the winds have not even started up.”

“The Glass Fire is the number one priority fire in the state,” he continued, “so we will have priority on resources.”

Nichols said that the number of 240 structures reported destroyed in the fire thusfar was low. “Those numbers are continuing to go up…that number will continue to go up here pretty substantially.

After months of declines, the San Francisco condo market shot up in September. Buyers may want to act soon because 'this market doesn't go on sale very often.'