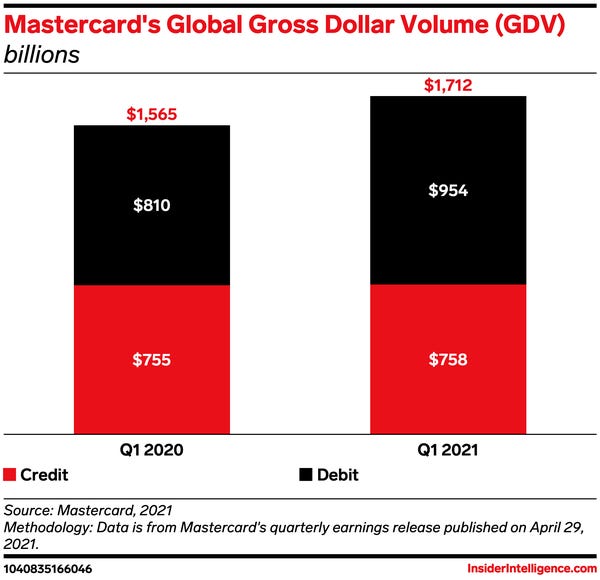 Growth was led by a jump in debit volume, which grew 17.8% YoY and accounted for $954 billion in transaction volume. Credit volume grew less than 1%, hitting $758 billion. But both debit and credit volume improved from the previous quarter: In Q4, global debit GDV grew 8.4% YoY, while global credit GDV declined 6.9%.

Mastercard’s recovery comes as vaccine distribution helps economies improve and parts of the world return to some sort of normalcy.

Mastercard is also expanding perks for cardholders and merchants while plunging further into the flourishing crypto space, setting itself up for continued growth. The card network made a multitude of announcements in Q1 that can further its volume recovery.

It unveiled new perks for US consumer and small-business cardholders––hoping to encourage card spending––and acquired digital identity platform Ekata, which can help minimize the growing risk of fraud for merchants and strengthen Mastercard’s relationship with merchant partners.

Mastercard also announced plans to integrate crypto into its network and will launch its first crypto credit card through a partnership with crypto exchange Gemini. All of these moves should help Mastercard further increase volume and continue its recovery.