Laura Ashley is to revive the designs of its late founder as part of a turnaround of the loss-making retailer.

The company’s new chief executive, Katharine Poulter, said it would raid its extensive archive of designs and fabric prints for inspiration after demand for its curtains and wallpapers plunged more than 20% in the last six months of 2019. “We are listening to our customers and bringing Laura back,” she said.

Poulter, who joined the company from the discount chain Wilko last month, faces a huge challenge. The company narrowly avoided collapse this week after poor trading resulted in its credit limit being cut by its main lender, the US bank Wells Fargo.

Laura Ashley’s chairman, Andrew Khoo, reiterated that talks between the company’s main shareholder – the Malaysian investment firm MUI Asia – and Wells Fargo about the terms of a £20m loan facility had been concluded successfully. “It’s business as usual,” he said.

The retailer was started in 1953 by Laura Ashley and her husband, Bernard, with fabrics printed on their kitchen table. The company became a stalwart of the British high street and Princess Diana was a fan of its floral fabrics. 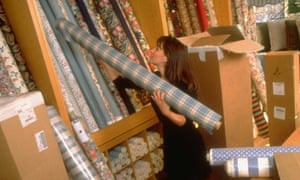 Despite Laura Ashley’s pedigree, the company has struggled in recent years, a situation made worse by grim high street trading conditions. The retailer, which has a market capitalisation of just £15m, has blamed Brexit concerns for undermining consumer confidence and deterring shoppers from making big-ticket purchases or starting big DIY projects.

At the same time, the housing market has slowed and house moves are key to the health of specialist retailers such as Laura Ashley. Like-for-like sales of decorating products such as paint, curtains and wallpaper were down 20.9% while demand for soft furnishings like cushions and bed linen fell 13.7%. Furniture sales were down 6.2%.

The overall financial picture was grim, with pre-tax losses more than doubling to £4m in the six months to 31 December on sales of £110m. Sales at stores open more than one year slumped 10.4%. Poulter’s turnaround is expected to result in more store closures in the UK where it has already scaled back to 147 outlets.

Despite the problems in its home furnishings business, its clothing arm held up better, with sales level with a year ago as women embrace the trend for demure 1970s style dresses. The retailer has also been collaborating with a number of other fashion brands including Barbour and Urban Outfitters.

The Malaysian tycoon Khoo Kay Peng bought into the group via MUI in 1998 and chaired it for two decades until the current chairman, his son, took over in 2018. “Whilst these results are disappointing, we believe that with the right focus and support, Laura Ashley has a strong future and can be successful again,” added Khoo.