Looks like a well-known advertising icon is getting furloughed ― and it isn’t temporary.

Land O’Lakes is removing the Native American woman who has appeared on its containers of butter and margarine since 1928. Instead, future packages will showcase photos of real Land O’Lakes farmers and co-op members, along with the phrase “Proud to be Farmer-Owned,” according to a company release.

The Grand Forks Tribune noted that many Native people, including North Dakota state Rep. Ruth Buffalo (D), have called the woman’s image racist. Buffalo told the paper the image goes “hand-in-hand with human and sex trafficking of our women and girls.… by depicting Native women as sex objects.”

Land O’Lakes President and CEO Beth Ford did not cite cultural sensitivity as the reason for the change.

“As Land O’Lakes looks toward our 100th anniversary (in 2021), we’ve recognized we need packaging that reflects the foundation and heart of our company culture — and nothing does that better than our farmer-owners whose milk is used to produce Land O’Lakes’ dairy products,” Ford said in a release.

“As a farmer-owned co-op, we strongly feel the need to better connect the men and women who grow our food with those who consume it,” she said. “Our farmer-to-fork structure gives us a unique ability to bridge this divide.”

Regardless of the reasoning, Buffalo called the decision by the Minnesota-based company “a good gesture and a step forward.”

She added, “We as a whole need to keep pushing forward to address the underlying issues that directly impact an entire population that survived genocide.”

The new packaging is already appearing on products like the tubs of butter and deli cheeses and will begin to appear on stick butter within the coming weeks. 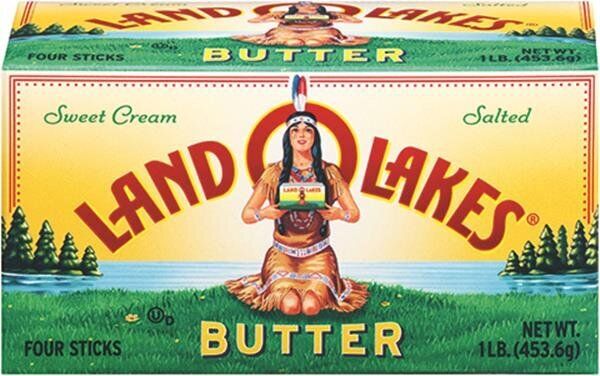