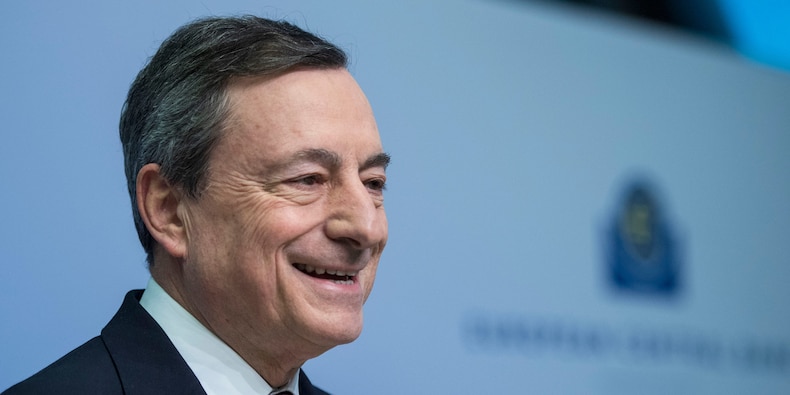 The former head of the European Central Bank, Mario Draghi, has been tapped to form a new Italian government as prime minister. And it’s made the country’s banks and investors very happy.

Italy’s main stock index – the FTSE MIB – jumped 2.65% on Wednesday morning after the possible return of Draghi was reported on Tuesday evening. It outstripped gains of 0.64% on the Europe-wide Stoxx 600.

Shares in the country’s banks were among the biggest winners. Intesa Sanpaolo surged 5.83% on the Milan stock exchange, Banco BPM was up 4.55%, and UniCredt climbed 4.72%.

Italian president Sergio Mattarella is due to meet Draghi on Wednesday to invite him to form a government, according to reports in various outlets.

Read More: Vanda Research’s new retail-investor tracker nailed silver and AMC as likely targets for a Reddit-driven short-squeeze. These are the 4 stocks it says could be the next GameStop.

Draghi led the ECB through the worst of the eurozone’s banking and sovereign debt crisis after taking the reins in 2011.

His promise to use the ECB’s firepower to do “whatever it takes” to support the euro is credited with staving off disaster for the bloc. Yet the ECB’s role as part of the “troika” of institutions that enforced strict terms on debtor countries has made him unpopular in some quarters.

The Italian government’s borrowing costs fell sharply as investors warmed to the idea of Draghi taking the helm.

The yield on the 10-year Italian government bond fell 9.1 basis points on Wednesday morning to 0.560%. The fall from as high as 0.658% on Tuesday narrowed the closely watched difference – or “spread” – between Italian and German 10-year government bond yields to its lowest since the middle of January.

Read More: JPMorgan’s market-moving quant guru lays out an under-the-radar risk that could spring up during the pandemic recovery and snowball into a full-blown crisis across the western world

Talks among the leading parties on forming a new government have failed. Mattarella is therefore expected to invite Draghi to form a “technocratic” government, according to reports in the national and international media.

A technocratic government is one made up of experts in policy and economics, rather than elected officials.

“Super Mario to the rescue,” said Neil Wilson, chief market analyst at trading platform Markets.com “I think many of us who watched every ECB presser for the last decade will think Italy has secured a top operator. If you need a technocrat, you won’t do better.”

However, Draghi could struggle to govern as the Five Star Movement, the biggest party in parliament, has already said it would not back a technocratic government.