China’s military is stepping up its use of surveillance and strike drones in the country’s mountainous border regions, with recent training highlighted by the PLA and state television.

The People’s Liberation Army on Thursday released images of about 200 troops taking part in exercises using drones in the southwest of the country.

In a post on its official WeChat social media account, the PLA said the training by the 75th Group Army was aimed at improving soldiers’ skills in using drones for aerial surveillance and precision strikes.

“Drones are our second pair of eyes on the battlefield,” the post said.

The 75th Group Army is based in Yunnan province, which borders Myanmar, Laos and Vietnam.

Meanwhile, an elite unit in the far western Xinjiang region used drones for a recent aerial surveillance exercise in the Kunlun Mountains.

State broadcaster CCTV aired footage of the drill on the weekend, identifying the troops as belonging to Jin Lie Sun, or Golden Eagle and Saker Falcon — an elite unit set up in 2017 that uses hi-tech military equipment. The report said the information gathered was sent back to a command centre to inform decisions made during the drill. 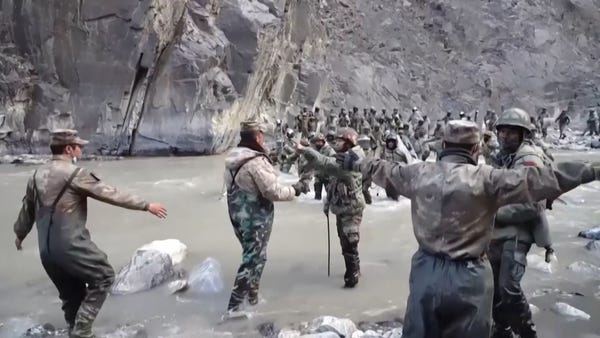 Drones have become increasingly important for defence forces around the world, and they are a focus for military research in China.

Last week, the National University of Defence Technology said it had bought a drone simulation training system that can operate a “super swarm” from Tiduyun, a tech company in Guangxi.

The military academy in Hunan province was sanctioned in 2019 by the US Bureau of Industry and Security, which said it posed “a significant risk of being, or becoming, involved in activities contrary to the national security or foreign policy interests of the United States.”

The announcement of the new training system comes after Chinese media reported in October that a low-cost “suicide drone” — dispatched in a swarm to attack a target — had been developed in China.

Drones were also used by Chinese troops after the Himalayan border clash with India in June, the worst fighting between the two sides in decades. A private drone maker in Shenzhen last week revealed on WeChat that two of its employees had been sent to the area in the Galwan Valley to help the PLA in its surveillance of “illegal activities by the foreign force.”

After months of tensions, troops from the two sides last month disengaged and are forming demilitarised zones along the border.

China is a world leader in developing and making both civilian and military drones for everything from logistical support to surveillance, reconnaissance and precision strikes. The PLA has a high-altitude, high-speed spy drone in service, the WZ-8, as well as the GJ-2, a medium-altitude, long endurance combat drone.