The last two Boeing 747s operated by British Airways have made their final flights from Heathrow airport, after coronavirus meant the national carrier could no longer afford to fly its jumbo jets.

The distinctive four-engine planes, the backbone of BA’s long-haul fleet for almost 50 years, were beloved by pilots, enthusiasts and many passengers – but their noise and fuel consumption will mean few airline accountants, let alone environmentalists, will be sorry to see them go.

BA’s final pair of 747s took off one after the other from Heathrow on Thursday morning at about 7.47am, with one circling back around the airport for the benefit of spectators. Having completed more than 104m miles of flying between them, the duo’s last trip was a short hop west.

One flew to Kemble airport in the Cotswolds and another to St Athan in Wales, where they will be broken up for scrap. 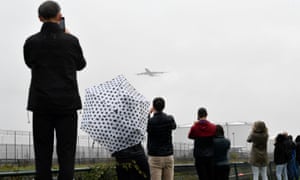 Álex Cruz, BA’s chief executive, said it was “an emotional milestone” to see the so-called Queen of the Skies depart for the last time in BA colours. “I know I speak for our customers and the many thousands of colleagues who have spent much of their careers alongside them when I say we will miss seeing them grace our skies.”

The 747s were used on long-haul routes, primarily the lucrative transatlantic corridors serving a high proportion of business travellers until they were closed by Covid-19 travel bans.

BA had already decided to phase out its 31-strong fleet by 2024 as part of its carbon reduction commitments. When the pandemic hit, it took the decision to retire the fleet permanently.

The national carrier has scrapped the jumbos amid savage cost-cutting, including laying off more than 10,000 staff and imposing wage reductions on remaining employees. Cruz last month warned that air travel had permanently changed, with BA carrying less than 20% of its 2019 traffic each day.

Almost 1,000 747s were in active service worldwide in 1998, at the peak of the plane’s popularity, but a new generation of lighter, more fuel-efficient long-haul aircraft had started to supersede it.

According to data from the analytics firm Cirium, the bulk of the remaining 747s worldwide are cargo planes, with just under 300 in service. Of 157 jumbos still theoretically in use for passengers, only 35 are in service, with the rest in storage.