Bank of America CEO Brian Moynihan provides insight on ‘Mornings with Maria’ from the World Economic Forum in Davos, Switzerland.

Bank of America CEO Brian Moynihan weighed in on the probability of a recession and argued that the U.S. consumer is in "very good shape," which makes the job of the Federal Reserve "tougher."

Moynihan provided the insight on "Mornings with Maria" from the World Economic Forum in Davos, Switzerland, noting that his research team is "standing by" their initial projections of about 2.5% growth this year and about 1.5% growth next year.

"And they don't really have any quarters that are negative," he told host Maria Bartiromo, noting that the economy, however, is expected to slow down.

Late last month it was revealed that the U.S. economy cooled markedly in the first three months of the year, as snarled supply chains, record-high inflation and labor shortages weighed on growth and slowed the pandemic recovery.

EVERYBODY GETTING 'HURT' BY INFLATION: INVESTMENT EXPERT

Gross domestic product, the broadest measure of goods and services produced across the economy, shrank by 1.4% on an annualized basis in the three-month period from January through March, the Commerce Department said in its first reading of the data.

Moynihan provided the insight ahead of the second estimate released by the Bureau of Economic Analysis on Thursday, which revealed that real GDP decreased at a slightly higher annual rate of 1.5% in the first quarter of this year.

A recession refers to a contraction in GDP activity for two consecutive quarters.

Moynihan noted during the interview with Bartiromo that aired on Thursday that his researchers moved up the probability of a recession forecasting that "there's a one in three chance."

"But they really think it's going to be a soft landing and not quite get to recession, although it will slow," he continued.

Moynihan said that so far in the month of May, "spending is up double digits from last May" and that "spending on services is way up."

"You see some of the retail and you've seen some of those retailers see a little bit more mitigation as people can get out and travel and so we see that's very good," the CEO said.

Last week it was revealed that Americans ramped up their spending at retail stores in April, a sign that consumers are still weathering the inflationary storm even as prices continue to hover near a 40-year high.

Retail sales, a measure of how much consumers spent on a number of everyday goods, including cars, food and gasoline, rose 0.9% in April from the prior month, the Commerce Department said last Tuesday. That was in line with expectations from Refinitiv economists, but it marked a noted slowdown from the upwardly revised 1.4% gain in March. 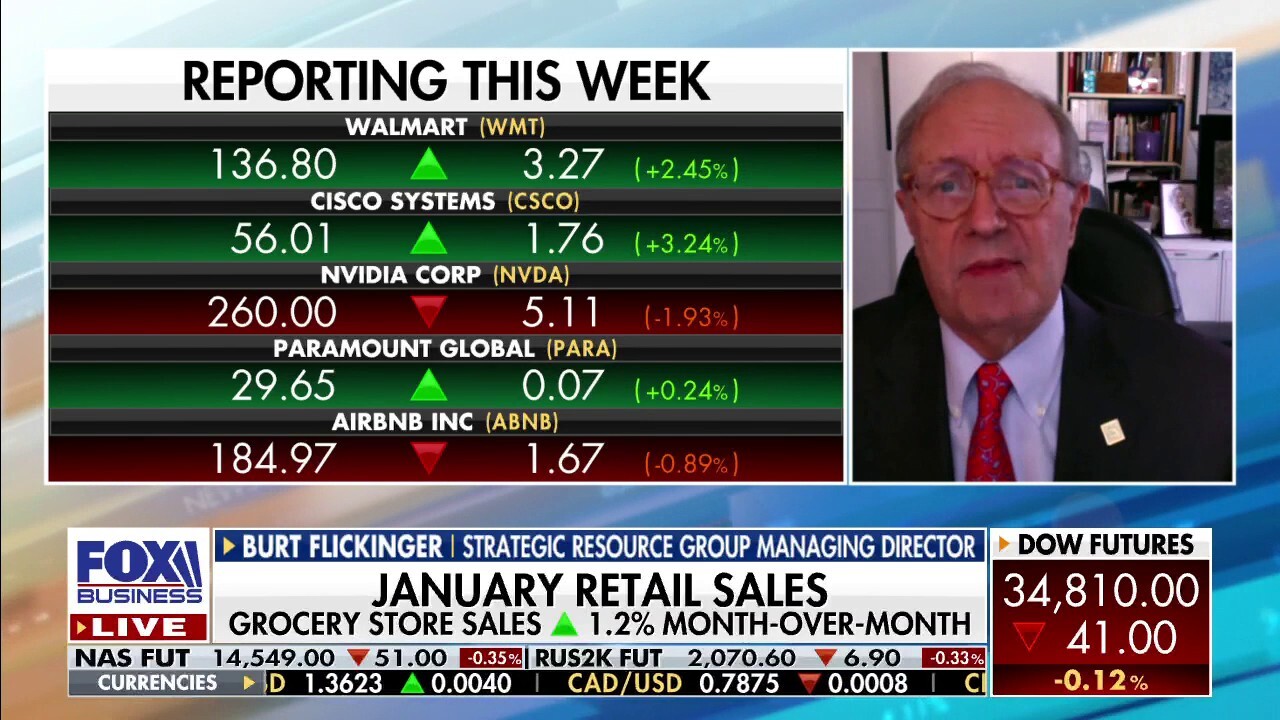 Retail sales report should be taken with ‘grain of caution’: Burt Flickinger

"The money in the customer accounts through the end of the month of April was up over March … especially in the lower balance accounts," Moynihan said, also noting that wages are "up 8% year over year, especially for median income and down" based on direct deposit information.

He also pointed out that the consumer has "lots of borrowing power."

"So the U.S. consumers is in very good shape and frankly that's good news for the Fed, but also makes their job tougher because if you think about wage growth and inflation and wages and the tightness of the labor market, that's still there and they've got to slow that down," Moynihan said. "And that's the tension that will go through the system here over the next four to six quarters."

Markets have been experiencing volatility in recent weeks as concerns over Federal Reserve rate hikes and high inflation continued to worry investors.

The central bank faces the tricky task of cooling demand and prices without inadvertently dragging the economy into a recession. 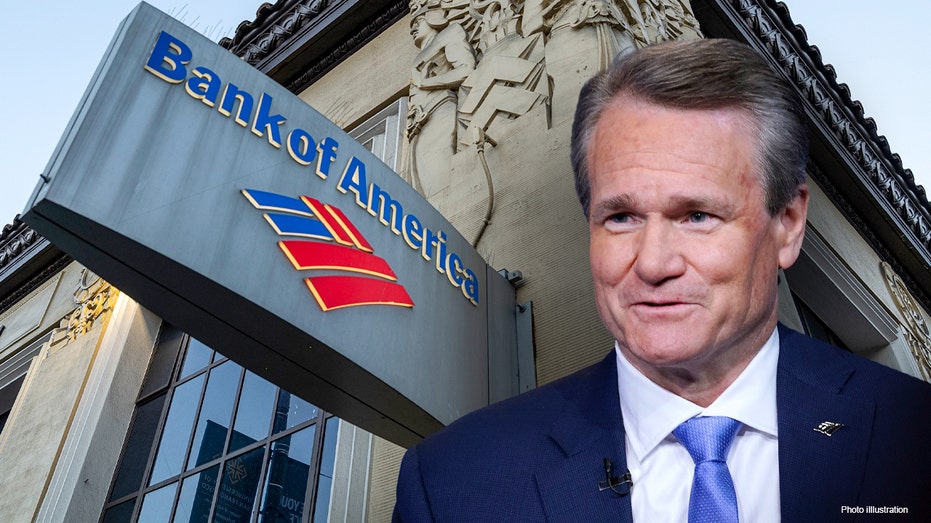 Fed policymakers hiked the benchmark federal funds rate by a half point earlier this month, and Powell has all but promised that two, similarly sized increases are on the table at the forthcoming meetings in June and July. He echoed that sentiment on Tuesday as the Fed races to catch-up with runaway inflation and bring it back down to the 2% target.

Moynihan also discussed raising wages amid a tight labor market during the wide-ranging interview with Bartiromo.

Starting the end of next month, Bank of America will raise its minimum hourly wage for U.S. employees to $22.

The move, which brings the bank a step closer to fulfilling its pledge of paying $25 per hour by 2025, will increase the annualized salary for full-time Bank of America employees to more than $45,000. 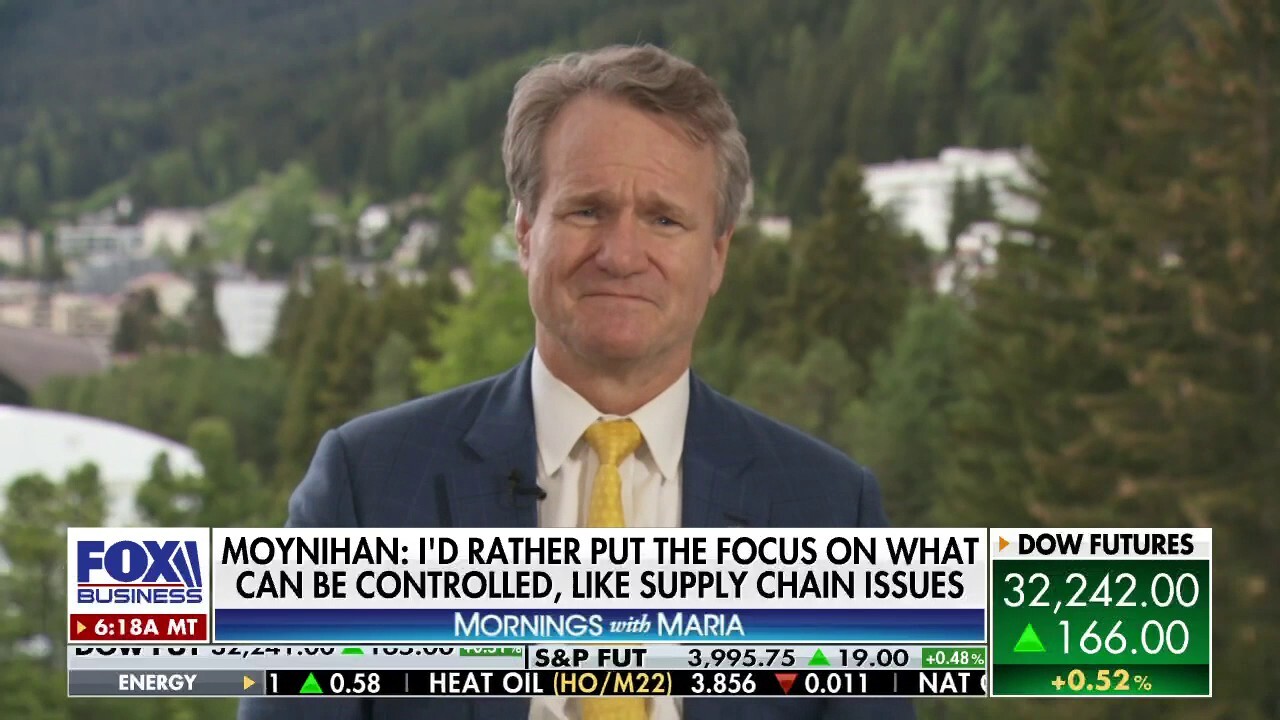 Bank of America CEO Brian Moynihan provides insight on ‘Mornings with Maria’ from the World Economic Forum in Davos, Switzerland, noting that ‘we have to have a just transition.’

Moynihan told Bartiromo that he has "accelerated" the commitment of paying workers higher wages this year "because of the market."

He pointed out that last week, Bank of America employees making less than $100,000 a year got a 3 to 7% raise depending on the length of service to the company in an effort to reward longevity and "the career mindset that we want."

He then argued that "it pays out for the shareholder" because Bank of America is able to keep expenses "relatively flat."

As of the end of March, there are 11.5 million job openings in the United States. A record 4.5 million Americans, or about 3% of the workforce, quit their jobs in March in search of better wages, working conditions and hours.

Bank of America's latest wage increase comes as the consumer price index, a broad measure of the price for everyday goods including gasoline, groceries and rents, rose 8.3% in April from a year ago. On a monthly basis, average hourly earnings dropped 0.1% in March, when accounting for the inflation spike. On an annual basis, real earnings dropped 2.6% in April.