Home » Business » Apple is the best bellwether for the coronavirus fallout

There are plenty of signs of the strains China’s economy is coming under as a result of the coronavirus. The sharp fall in German business confidence is one, because Europe’s biggest economy suffers when demand for its exports falls. The decision by Cathay Pacific, Hong Kong’s flag carrier airline, to cancel 40% of its flights in February and March is another.

But the best bellwether of what has been happening in China is Apple, which has warned that it is on course to miss its revenue forecasts in the first three months of 2020. China is a big market for Apple – accounting for around one-sixth of its global revenues – and is the source of most of its products. The coronavirus represents both a demand and a supply shock to the company.

Apple’s statement to investors represented something of a reality check to the financial markets, which have been blithely assuming that the coronavirus would represent only a short-lived hit to China and to the wider global economy. To be sure, Apple says that production will return to normal but stresses that the process is taking longer than expected. This is far more serious than the outbreak of Sars (severe acute respiratory syndrome), and its timing could hardly have been worse.

Take a look at the world’s four biggest economies in reverse order. Germany flatlined in the final three months of 2019 – and that was even before the first cases of the coronavirus were detected in Wuhan. Japan, the third biggest economy, contracted at an annual rate of more than 6% in the fourth quarter of last year and is nailed on for a recession. China, number two on the list, was experiencing its slowest rate of expansion for three decades as a result of weaker demand, its trade war with the US and a deliberate attempt on the part of Beijing to go for lower but higher quality growth.

That just leaves the US, which has so far held up the best of the four. But the fact that retail giant Walmart on Tuesday failed to meet Wall Street’s sales and profits expectations for late 2019 is an indication of how American consumers are seeing their spending power eroded by the higher cost of imported goods due to Donald Trump’s tariffs. Trade wars have consequences.

Bulls in the financial market have seen every dip in share prices as a buying opportunity, primarily because they are confident that the Federal Reserve and other central banks will step in and provide ample stimulus if things start to look grim. In the short-term, the bulls are right. In the long-term, central banks will be legitimising reckless behaviour and risking the crash to end all crashes. 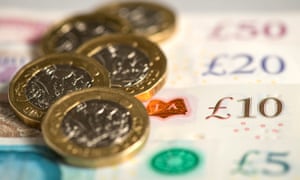 Put out the bunting. Crack open the champagne. It is time to celebrate a milestone in history: the earnings of the average British worker are finally higher – adjusted for inflation – than they were at at the time of the previous peak. For those whose memories need jogging that was in early 2008, when Gordon Brown was prime minister and the world was gearing up for the Beijing Olympics.

No question, this has been the strangest period for the labour market in living memory. As a nation, the UK took a pay cut during the recession of 2008-09 rather than endure the mass unemployment it had seen in the past and has suffered a prolonged hit to real wages of a sort not seen for 200 years.

As the latest official figures show, Britain now has the highest employment rate in its history, the lowest unemployment rate since the mid-1970s and yet the annual rate of earnings growth is coming down rather than going up, from 3.2% in November to 2.9% in December.

One theory is that this is just a temporary phenomenon and that wages will start rising more quickly now that the general election is out of the way and Britain has left the European Union. April’s 6%-plus increase in the national minimum wage will affect around 10% of workers.

But in the past a labour market this tight would see earnings growing at an annual rate of 5% rather than 3%. So perhaps the labour market is not really as tight as it looks. Self-employment is driving employment growth and the number of zero-hour jobs is approaching the one-million mark. That tells us something; work is casualised and less secure.