Home » America is getting ready for its post pandemic glow-up

America is getting ready for its post-pandemic glow-up.

Peak sweatpant has passed and high heels are hot again, in the ultimate symbol of an economy ready to let loose. Americans are booking beauty services, buying going-out clothes again, and readying for a “hot vax summer” as they emerge from lockdown looking and feeling different than they entered, helping the economy roar back to life in the process.

It’s the result of vaccination rates revving up, big cities reopening, and Americans sitting on a ton of cash. Between three stimulus checks and the decline in discretionary spending that accompanied a pandemic shutdown, Americans were holding $2.6 trillion in excess savings as of mid-April, per Moody’s Analytics.

And that’s why so many economists are predicting that a lockdown lift will see the biggest boomtime in a generation, potentially ushering in a new era in the US economy. Moody’s Analytics expects the US economy to grow 6.4% in 2021 after shrinking 3.5% in 2020.

But to power such an economic transformation, Americans need to keep spending.

BofA’s head of North America Economics, Ethan Harris, wrote in March that the US’ economic fate will depend on whether Americans view their excess savings as wealth or deferred income. His team sees the savings being treated as the latter, which should “help support exceptional growth this year in addition to the tailwinds from fiscal stimulus and an improving virus picture.”

Mark Zandi, chief economist at Moody’s Analytics, agrees. “An unleashing of significant pent-up demand and overflowing excess saving will drive a surge in consumer spending across the globe as countries approach herd immunity and open up,” he wrote in a note. He sees 20% of excess savings being spent in 2021, and another 20% next year.

Credit card spending is already up, but it’s just the beginning. Inflation, unequal savings distribution, and an uneven economic recovery may prove to be challenges in spending enough to fuel an economic boom.

Spending on outdoor activities and a ‘hot vax summer’

“The snooze is over,” wrote BofA’s Michelle Meyer, head of US economics, in a note published on Thursday. BofA’s card spending showed a massive uptick in consumer spending for the week, up 45% year-over-year and by 20% over two years previous.

The third stimulus has already impacted Americans’ bank accounts, per Bureau of Economic Analysis data. As incomes climbed by 21.1% last March — a record monthly income leap dating since 1946 — consumer spending rose with it, increasing by 4.2%. Americans haven’t spent that much since June. Total consumer spending, not adjusted for inflation, has now exceeded pre-pandemic levels.

In consumer spending, still leading the way is solitary leisure — solo activities that Americans turned to in the social-distancing era as previous forms of leisure, especially hospitality and entertainment, fell off dramatically. Spending on sporting goods such as golf, campground, and bike equipment, is continuing its momentum with activity above pre-pandemic norms, per BofA.

But we’re also starting to see a resurgence in the activities of pre-pandemic yore. Spending on transit, restaurants and bars, department stores, and clothing have all increased by over 100% on a daily basis over the past 10 days, per BofA. 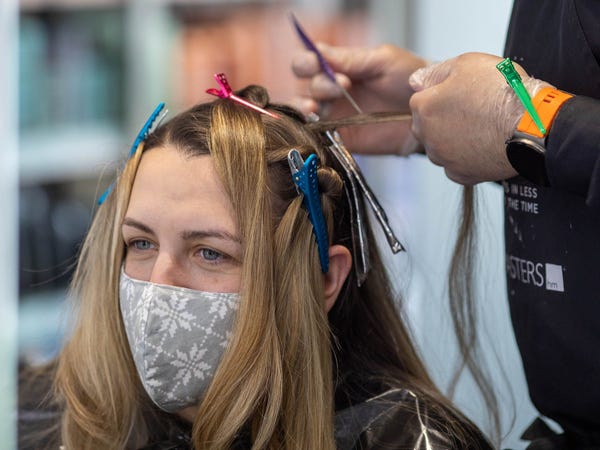 Retailers are gearing up for a “peacocking effect” and dress sales on the rise, while jeans are making a comeback, Insider’s Avery Hartmans reported. Blazers, stylish tops, and brightly colored sandals are all seeing signs of life. Retail CEOs everywhere from Gap to Urban Outfitters have noted signs of an incoming retail boon, with the latter already seeing an uptick in purchases of going-out clothes.

The post-pandemic beauty boom has also arrived, as The Atlantic’s Amanda Mull reported. From eyebrow threading and hairstyling to mani-pedis and cosmetic injections, she wrote, people are booking up beauty services for their own personal glow-up. Beauty sales increased by 31% for for the week ending April 24, per BofA, compared to 2019.

The start of this spending is already making a difference. GDP grew at a 6.4% annualized rate in the first quarter, the Commerce Department estimated on a preliminary basis.

Economists have thus upped their predictions for economic growth every month of the year, according to Bloomberg’s latest monthly survey, forecasting an annualized pace of 8.1% GDP growth in the second quarter.

An unequal recovery and unequal savings

While Americans have already begun swiping their cards, there are still holes in the economy to fill and challenges to overcome.

Entertainment and airline spending are improving, but still weak, per BofA. More Americans intend to travel as the weeks go by, with some already booking vacation rentals and hotels, and airlines just saw their busiest weekend since pre-pandemic, but travel’s comeback is a gradual one.

That might partly be because the economic recovery across America hasn’t been uniform. BofA spending analysis finds the South and parts of Midwest are faring better economically than the West and the Northeast. That’s likely because the latter regions had longer lockdowns and a slower easing of restrictions in an attempt to curb the spread of the coronavirus.

Also unequal is the share of savings built up during the pandemic. Zandi said in the Moody’s note that this would limit an even bigger boom in spending. “Much of the excess saving has been by high-income, high-net-worth households who are likely to treat the saving more like wealth than income, and will thus spend much of less it, at least quickly,” he wrote. 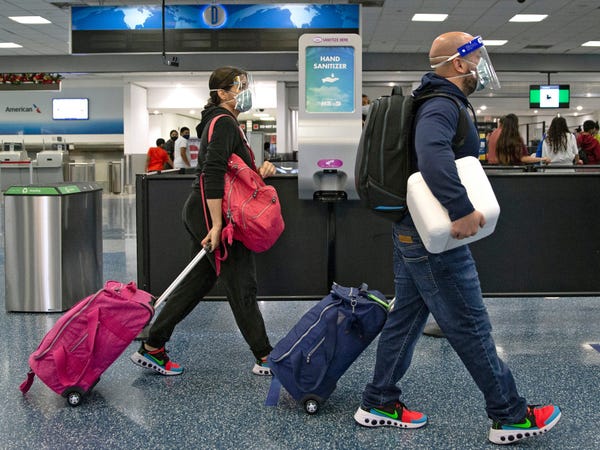 Nearly two-thirds of the excess savings in the US is by households in the top 10% of the income distribution, per Moody’s data, and three-quarters is by those in the richest 20%.

Consumer spending accounts for 70% of the American economy, and half of that is from the top 10% of American households, per estimates from Goldman Sachs and Deutsche Bank, respectively. That means about one-third of US GDP comes from spending by the top 10%. In other words, the US needs spending from wealthy households the most.

But there’s a side effect that may come with unleashing pent-up demand: inflation. While experts don’t think the economy will overheat like it did in the 1970s, some goods and services have begun to get more expensive amid the supply shortages that have come with reopening. The unpredictability of inflation could cause consumers to curb their spending.

A world with baggy jeans and remote work

In a post-pandemic world, though, America will look a little different. The point of a glow-up, after all, is transformation.

And while Americans whiled away their quarantine days baking bread and reorganizing their closets, new trends emerged. Clothes are brighter, wide-legged jeans have replaced skinny jeans, side parts are no longer cool, and the “ugly fashion” movement has seen its pre-pandemic popularity accelerate as shoppers increasingly purchase things like grandpa shoes and Crocs

Urban areas too, will look a little different. While experts and the data are pointing to big cities like New York making a comeback, they will likely function in new ways. Urban theorist Richard Florida previously told Insider he thinks major cities will be reshaped and revived by a newfound focus on interpersonal interaction that facilitates creativity and spontaneity. He said the community or neighborhood itself will take on more of the functions of an office.

The work-from-home revolution could bolster new cities’ real-estate markets, as more broadly shared prosperity counteracts decades of increasing regional inequality, but spending within cities themselves could suffer. For instance, economists estimate spending in downtown areas will be 10% depressed — or more in the case of Manhattan — because of the remote-working revolution. So the fashions on the street will look different, and the cities will probably be a bit emptier.

People are also buying more stuff for inside the home. Spending in home categories was up 50.3% over 2019 for the week ending April 24, according to BofA. Americans have learned to spend in a more private way during a year inside. The glow-up is on, but Americans will have to keep spending for a truly impressive makeover.